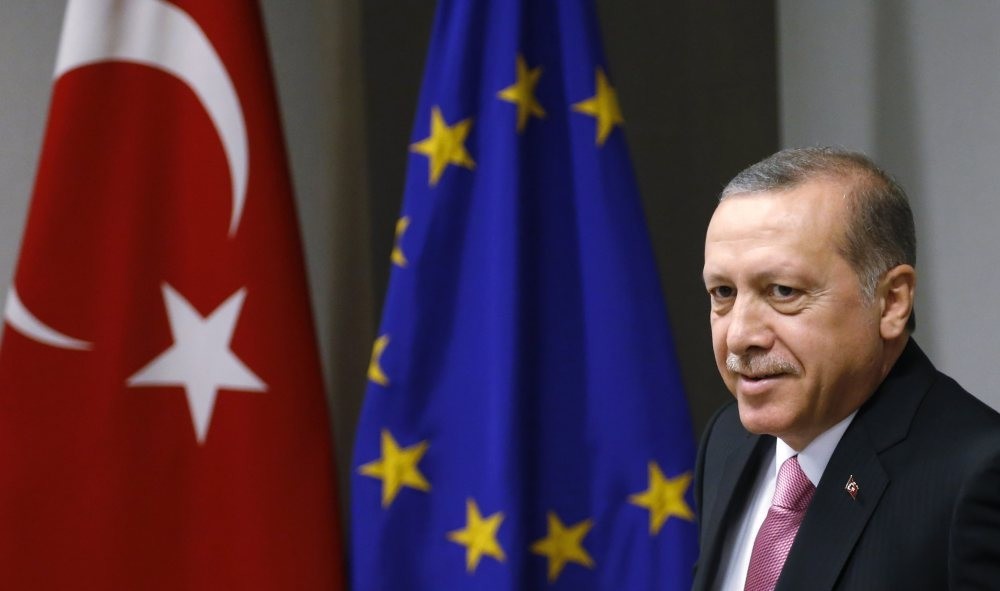 President Erdou011fan waits for the arrival of European Council President Tusk prior to a meeting in Brussels, Oct. 5.
by Yunus Paksoy Jun 24, 2016 12:00 am

Turkey has sent its strongest ultimatum to date to the European Union, as President Erdoğan and Foreign Minister Çavuşoğlu asserted that a referendum on whether Turkey should continue its accession process with the 27-nation bloc could be held if it does not keep its promises

Amid turmoIl in the European Union due to the inability of the 27 nation-bloc's leaders to hold the union together, Turkey has sent a stern warning to the EU, as President Recep Tayyip Erdoğan and Foreign Minister Mevlüt Çavuşoğlu said there could be a referendum in the near future to exit membership talks. "You officially made a promise to Turkey in 1963. It's been 53 years. You are still wasting time. Why are you wasting time? … They are discriminating against Turkey. If the EU dismisses Turkey, we will go to the people. We'll ask if Turkey should continue membership talks with the EU," he said on Wednesday, adding that he thinks the reason why the EU has been stalling Turkey's accession process is because Turkey has a large Muslim population. "[The referendum] is not blackmail or a threat. We want what is our right. Our citizens also deserve it," Çavuşoğlu said Tuesday, adding that Turkey could hold a referendum if the promises are not met.

"If a referendum were to be held today, an overwhelming portion of the public would say no to the membership talks," Adil Gür, the president of the A&G research company, which was the most successful polling company in the Nov. 1 elections, told Daily Sabah.

"Injustice and double standards for Turkey have made people indifferent to the European Union. Seventy percent of people would rebuff the EU in a referendum," Kemal Öztürk, a columnist for the Yeni Şafak daily, told Daily Sabah.

Mehmet Murat Pösteki, the head of the Objective Research Center (ORC), told Daily Sabah in mid-March that according to a survey conducted by his company, nearly 65 percent of the public did not care about whether Turkey is accepted into the EU or not.

Erdoğan railed at British Prime Minister David Cameron for his assertion that Turkey would not be able join the 27-nation bloc until the year 3000. "They are sending us signals that we cannot join the EU until the year 3000. Cameron, you did not used to talk like this when we were together. What happened now?" he said.

Asserting that there are two reasons why Turks are highly skeptical of the EU, Gür said: "The first reason is that the EU has been wasting Turkey's time. The second is that the EU did not keep its promises over the course of the visa liberalization process."

"If the EU was really something, would the U.K. hold a referendum to leave the union?" Öztürk contended. "Years later, the EU will come to Turkey's door to offer membership. Even now, Turkey's growth rate is better than many member states."

Millions of Britons began voting Thursday in a bitterly fought, knife-edge referendum that could tear up the nation's EU membership and spark the greatest emergency of the bloc's 60-year history.

A record 46.5 million voters were registered to decide Britain's future in the European Union, which was born out of a determination to unite in lasting peace after the carnage of two world wars.

Claiming that Turks do not really care about joining the EU, Öztürk said the refugee crisis and the EU's stance on terrorist organizations in Turkey created distrust between them.

Apart from support for Turkey's bid to join the EU, Gür contended that nearly 80 percent or 90 percent of Turks do not really care about visa liberalization."If Mr. Erdoğan is pursuing the strategy of denying Turks the right to free travel to Europe, then he will have to take responsibility for that to the Turkish people," European Commission President Jean-Claude Juncker had said in mid-May. "That isn't my problem. It will be his problem."

Erdoğan asserted that Turks are not chasing visa liberalization or the readmission agreement. "You are currently chasing Turkey. You are now thinking what will happen to us if Turkey opens its doors to refugees."

"Turkey has done its part regarding the visa liberalization process. Our stance on refugees is clear. They are our dear guests. However, if they want to leave for Europe and the EU does not fulfill what is required, we will open our borders," Justice and Development Party's (AK Party) Group Deputy Chairman Bülent Turan told Daily Sabah in May.
Last Update: Jun 24, 2016 2:57 pm
RELATED TOPICS