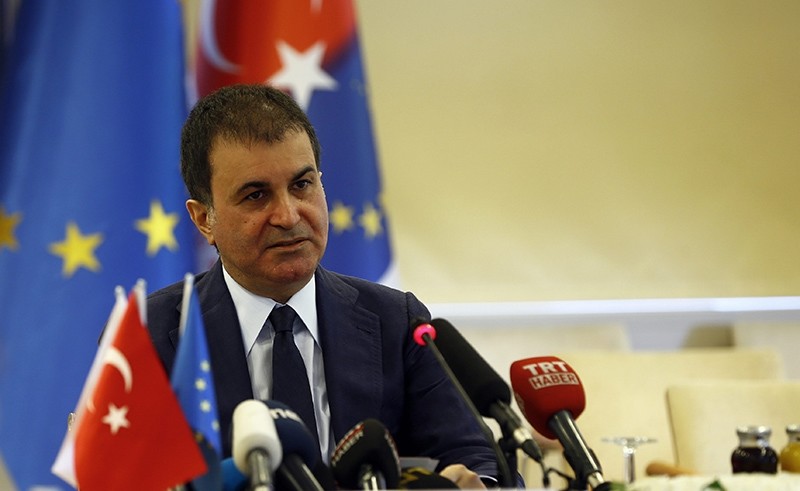 Following Austrian Chancellor Christian Kern's unexpected call for an end to Turkey's membership talks with the European Union, EU Minister and Chief Negotiator Ömer Çelik hit back at Kern, saying that the chancellor's words are similar to those of far-right figures.

Speaking to the media in a joint press conference with Secretary-General of the Council of Europe Thorbjorn Jagland in Ankara on Thursday, Çelik said that Europe's founding values remain a reference for Turkey. He added that Kern's words were "disturbing" and similar to far-right statements.

Chancellor Kern told the told Austrian media on Wednesday that "We have to face reality: membership negotiations are currently no more than fiction," claiming that Turkey "does not meet the democratic or economic standards of EU membership."

As Austrian Chancellor Kern and EU Minister Çelik exchanged sour words regarding Turkey's membership bid to the EU, the 28-nation bloc ruled out such a possibility. European Commission spokeswoman Mina Andreeva stressed Thursday that nothing about Turkey's candidacy status has changed, the DPA reported.

"Progress in [accession] negotiations is measured against a series of requirements, of which [are] the respect for rule of law, human rights and fundamental freedoms," Andreeva said.

Writing about a recent interview that Çavuşoğlu gave to the German Frankfurter Allgemeine Zeitung newspaper, Austrian Foreign Minister Kurtz tweeted: "I do not accept Çavuşoğlu's ultimatum and reject it. The EU cannot proceed with dependencies and must protect its borders."

Afterwards, Çavuşoğlu late Monday had a Twitter spat with his Austrian counterpart Sebastian Kurtz. "Das ist nicht Ultimatum [It is not an ultimatum] Sebastian, it is my opinion. Freedom of expression, my friend," he tweeted.

In the interview, Çavuşoğlu had said: "We [Turkey] will have to take a step back from the readmission deal and the March 18 agreement if visa-free travel is not granted to Turkish citizens."