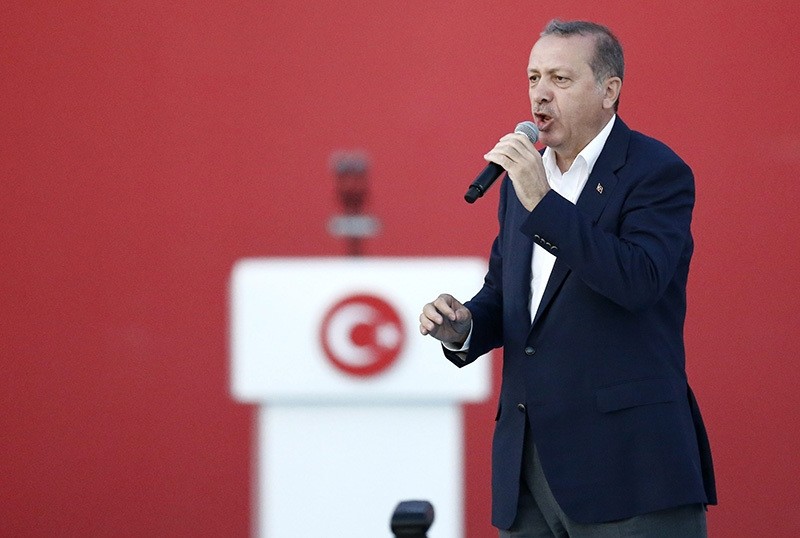 Turkish President Recep Tayyip Erdou011fan speaks during a rally to protest the failed coup attempt at 15th July 2016 and mourn the 240 killed people including civilians, policemen, and soldiers, in Istanbul, Turkey, 07 August 2016. (EPA Photo)
by Daily Sabah with Agencies Aug 08, 2016 12:00 am

Turkey's migration agreement with the European Union "will not be possible" if the EU does not keep its side of the deal on visa waivers, Turkish President Recep Tayyip Erdoğan has told France's Le Monde newspaper.

"The European Union is not behaving in a sincere manner with Turkey," Erdoğan said in his comments published on Monday, noting that the visa waiver for Turkish citizens was supposed to kick in on June 1. "If our demands are not satisfied then the readmissions will no longer be possible," Erdoğan said. He noted that the EU is only interested on keeping migrants out of its territory.

Erdoğan also spoke on the lack of interest and empathy from Turkey's allies and partners in Europe and the U.S. regarding Turkish people's united stance in fight with the coup-plotting Gülenist group. "The Western world is in contradiction with the values ​​it defends. It should be in solidarity with Turkey, which has appropriated its democratic values. Unfortunately, it preferred to leave Turks alone," he said.

The Turkish president said his country had not faced "an ordinary terrorist attack" adding that 240 people were martyred and almost 2,200 injured.

Erdoğan said he wished world leaders had reacted the same way they did after the Charlie Hebdo attack in Jan. 2015.

"Our prime minister joined the march in the streets of Paris. I would have liked the leaders of the Western world to react equally to what happened in Turkey and not just be content with a few cliches to condemn it [the coup attempt].

"I wish they had come here to Turkey," Erdoğan added.

The Turkish leader also criticized Western countries for "worrying" about officials and people fired from the public service, adding: "Instead of showing empathy, Western leaders had the opposite reaction."

Thousands of people have been suspended or fired from Turkish public institutions in the aftermath of the July 15 coup attempt, as the government tries to find supporters and sympathizers of the coup plot.

"A state does have the right to hire and fire officials it wishes," Erdoğan said, adding: "Turkey has never posed such questions to its Western partners… Everyone needs to know their place."

He continued: "We are currently struggling against a coup attempt, against terrorists. The Western world must understand what we face."

President Erdoğan also commented on the relations with the EU, which have been strained over the past couple of months due the problems concerning the readmission deal and statements from European politicians concerning Turkey's fight against terrorism. "For fifty-three years that we are at the gates of Europe. The EU is the only responsible. Nobody but Turkey has been treated in this way" he said.

Ahead of his visit to Moscow, a key ally of the Syrian regime, Erdoğan reiterated Turkey's position that Bashar al-Assad must go in order to reach peace in Syria. "600,000 people have been killed so far in Syria. Who is responsible? Assad. The responsible for the death of 600,000 of its citizens should not receive our support. Yet some argue. If we believe in democracy, we should not play this game. We have to go to something else," he said. He also ruled out the possibility of Syria falling into the hands of extremists like Daesh if Assad leaves.