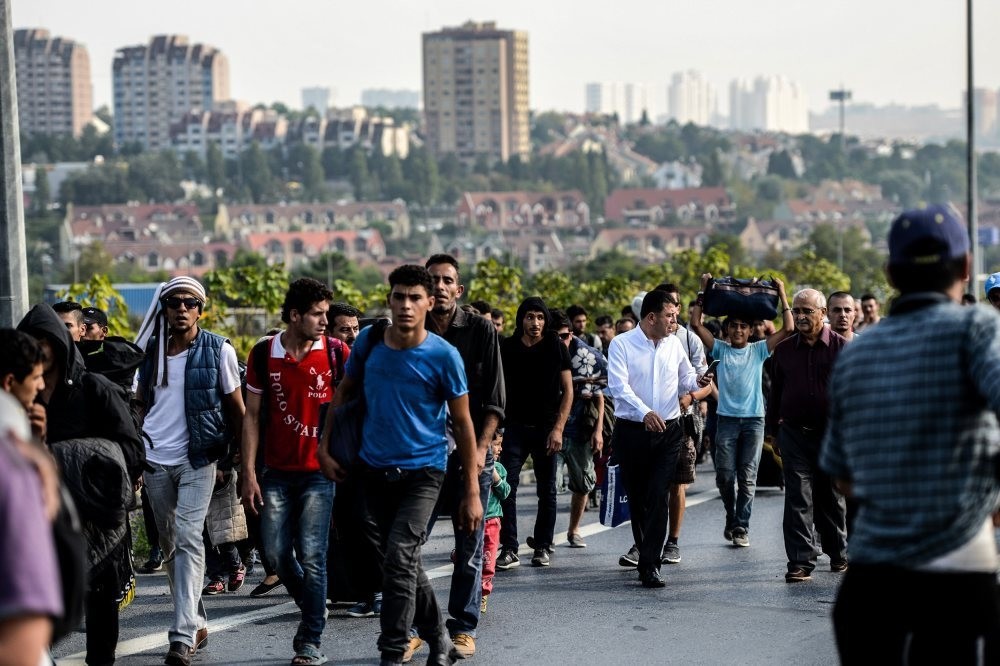 Even though the EU sends ultimatums to Ankara regarding its EU membership bid and visa-free travel for Turkish citizens, Ankara stands firm, saying that it will end the migrant deal if visa liberalization is not granted

Turkish President Recep Tayyip Erdoğan told French Daily Le Monde on Monday that its not possible to maintain the migrant deal without approval of the planned visa-free travel as part of the deal between Turkey and the EU and the deal process likely to be terminated since the EU's uncompromising attitude has become more visible.

Erdoğan also criticized the EU's attitude toward the failed coup attempt on July 15, saying that Turkey has not seen any solidarity from the EU either during or after the coup attempt.

The first official visit to Turkey from the EU was made almost 20 days after the failed coup attempt, even though the EU's Foreign Affairs Chief Catherine Ashton visited Egyptian President Abdel-Fattah el-Sissi, who ousted Egypt's first democratically elected President Mohammed Morsi in a bloody coup, just two weeks after the coup.

While the EU continues to discuss whether it should end the migrant deal and Turkey's accession talks, Turkey's general public does not give much importance to a possible migrant deal between Ankara and Brussels, or to EU membership. "There are three main reasons why the Turkish people do not want to continue talks with the EU," Adil Gür, the president of Istanbul-based research company A&G, said. Underlining that EU membership is no longer desirable for the Turkish people, Gür mentioned the exclusionist attitude, inadequate support for anti-terrorism and economic tactics of the EU as reasons behind this shift of public opinion. "Turkey has been exposed to exclusivist mannerisms from the EU, as the country has been continuing accession talks for more than 50 years. On the other hand, the PKK, which is listed as a terrorist organization also by the EU, can legally organize meetings even in capital cities across Europe. Also, Europe does not attract Turkey anymore in terms of the economic situation, as Turkey has much more success in economic terms as well as the employment rate when compared to many European countries. In this situation, why would Turkish people want to be members of the EU?" asked Gür.

Enes Bayraklı, a foreign affairs expert at the Political, Economic and Social Research Foundation (SETA) underscored the importance of visa-free travel and said that "The fate of the agreement depended on the EU's commitment to approving visa-free travel for Turkish citizens, which failed despite Turkey having extended deadlines twice. Under these terms, it is not logical for Turkey to continue the deal." He also added that the rationality of the EU's attitude toward Turkey should be seriously questioned, as unreasonable hostility toward the country raised by countries like Austria which follow far-right policies, Bayraklı said that even though Germany is trying to balance these far-right factions, it is not possible to maintain talks if this hostile attitude continues.

On the other hand, a survey published on Monday in Germany showed that the majority of Germans want to break the migrant deal with Turkey and halt Turkey's accession talks with the EU.

According to the survey made by Emnid for daily Bildam Sonntag, 52 percent of those surveyed want the migrant deal to be terminated. Furthermore, 66 percent support permanently halting membership talks between Turkey and the EU.

Furthermore, Greece's immigration minister has recently denied having called on the European Union to draw up a back-up plan in case Turkey suspends a deal aimed at limiting the influx of refugees as Europe fails to keep its promises on visa-free travel for Turkish nationals.

Yannis Mouzalas's denial came hours after Germany's Bild daily had quoted him as saying: "We are very worried. We need a Plan B in any case."

"The minister denies Bild's translation of his comments," the immigration ministry said in a statement, publishing what it said were Mouzalas's answers in Greek to Bild's questions.

According to the statement, Mouzalas had actually said: "Greece is committed to the EU-Turkey deal, which depends on both the EU's support and on Turkey's duty to respect it."

"Clearly we are concerned, but for now the number of people arriving on the Greek islands (since the deal was enforced in March) does not indicate that the deal is not being respected," he said.

Due to its geographic proximity to Turkey, Greece has become a key gateway country for refugees seeking to reach Europe.

At the height of Europe's refugee crisis last year, thousands of asylum seekers landed every day on Greek Aegean islands close to the coast of Turkey.

Arrival numbers have since plunged following the EU-Turkey deal, in which Ankara agreed to take back Syrian migrants arriving in Greece in exchange for billions of euros in aid and visa-free European travel for Turkish citizens.

Around 13,500 people requested asylum in Greece in the first five months of 2016, of whom 677 were granted refugee status, the country's asylum agency said Wednesday.

The number of those granted asylum in Greece is set to rise because many applications have yet to be examined, according to the country's asylum agency.In all, some 57,000 migrants have been blocked in Greece since the closure in March of the neighbouring European borders. Some 9,600 of them are stranded on the Aegean islands.
RELATED TOPICS