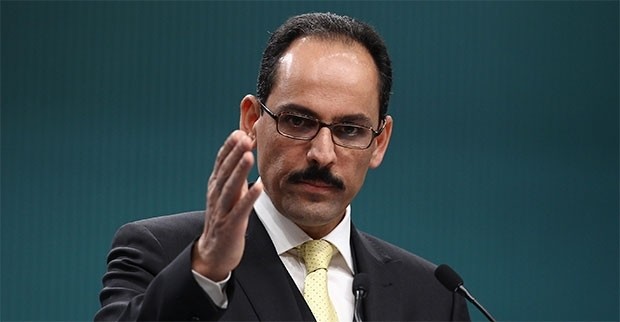 Presidential spokesman Ibrahim Kalın decried on Thursday the failure of European heads of state to visit Turkey following the foiled July 15 coup to express their solidarity.

"Not a single European head of state has visited Turkey since the failed putsch to express solidarity," Kalın, a top aide to President Recep Tayyip Erdoğan, said in a guest op-ed for Politico.com, headlined "Turkey: Brussels, you've got a problem."

"The EU portrays itself as a guardian of democracy, human rights and the rule of law, but its weak response to the most serious attack against democracy in any candidate country was disappointing," Kalın added.

Kalın said that former Swedish Prime Minister Carl Bildt was the "sole exception" who urged Europe to stand up for Turkish democracy.

He also criticized Brussels for missing out on Turkey's "newfound spirit of solidarity." Kalın said the coup attempt marked a "turning point" not only for Turkish people but also for relations between Turkey and Brussels.

"Some of the first statements from EU leaders were ambiguous, leading to anger and even conspiracy theories," he added.

Kalın charged, "Instead of unequivocally condemning the coup and supporting the elected government's efforts to bring the putschists to justice, Europe chose to attack Turkey's leaders for holding the would-be junta accountable for their crimes.

"The EU's reputation as an advocate of democracy, human rights and the rule of law is on the line. By giving Turkey the cold shoulder, Brussels not only alienates a major ally; it also betrays its values and principles."

He added that Brussels should show "greater sympathy" to the Turkish people, who defended democracy and freedom during the coup attempt.

Kalın called on European heads of states to cooperate and communicate "more closely" with Turkish officials before making public statements.

"And they must do their homework and recognize the destruction the Gülenists have caused," Kalın added.

He stressed the fact that army officers have confessed and admitted that they are members of the Gülenist terror-cult.

"It is neither realistic nor ethical to expect Turkey to carry on this fight on its own. The country's European and American allies should come to its aid. EU membership remains a strategic goal for Turkey, but it takes two to tango," Kalın added.

Fetullah Gülen, the leader of the Gülenist terror-cult, masterminded the failed coup, which left 240 people martyred and nearly 2,200 injured.

The fugitive preacher, who has lived in self-imposed exile in the U.S. state of Pennsylvania since 1999, is accused of leading a long-running campaign to overthrow the state through the infiltration of Turkish institutions, particularly the military, police, and judiciary, forming what is commonly known as the parallel state.