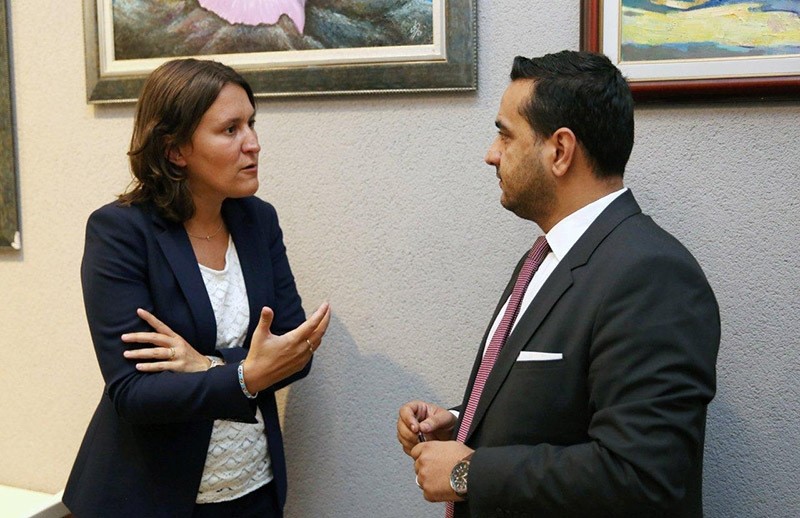 Kati Piri, Turkey rapporteur for the European Parliament (EP), said that Turkey has an obligation and right to bring those coup plotters behind July 15 to justice, adding that the Turkish people believe that Fethullah Gülen and members of the Gülenist Terror Group (FETÖ) are behind the July 15 coup attempt. She stresses the importance of the political unity that has become visible between the ruling and opposition parties following the coup attempt. Piri said that she has been pleasantly surprised by the display of unity between the political parties, admitting that Europe underestimated Turkish political parties.

EP Turkey rapporteur Kati Piri will visit Turkey between Aug. 23 to 25, together with EP Foreign Affairs Committee Chairman Elmar Brok. This is the first visit from the EP since the failed coup attempt, and Piri and Brok will visit Parliament, where they will meet with the Speaker İsmail Kahraman as well as government officials, party representatives and representatives from several non-governmental organizations (NGOs).

Speaking to Daily Sabah on Aug. 23, EP Turkey rapporteur Piri expressed her support for Turkish efforts in bringing those involved in the coup attempt to justice, stressing that all efforts must be made within the framework of rule of law. ''Turkey has every right and even an obligation to bring to justice these people who killed 248 innocent people, who bombed [Turkey's] Parliament, who tried to assassinate President [Recep Tayyip Erdoğan].'' She said that it is difficult for Europeans to understand the Gülenist terror cult: ''In general, in Europe it's very difficult for us to understand the whole concept behind the coup attempt. We don't have organizations like the Gülen Movement in Europe.'' She added that the joint visit is an important step in moving forward to understand Turkey's view on the issue.

''My gesture was to come here and show solidarity; both with the government and also with Turkish society. I don't think Europe understood the impact that the July 15 coup attempt had on Turkish society. Condemnation of the coup was clear. I have not heard a single colleague in Brussels say anything positive about those who tried to overthrow [Turkey's] democratically elected government."

Commenting on harsh rhetoric from Turkish as well as EU sides, Piri emphasized the importance of coming together and discussing matters face-to-face, rather than communicating through the media. ''What I have seen in the last five weeks is distrust for communication with each other, and I see that as a serious problem. Instead of communicating with the other side through the media, we should immediately come together and discuss [the issues]. Neither Turkey nor the EU can afford this type of rhetoric being used against one another."

Regarding the political unity displayed by political parties in Turkey during and after the July 15 coup attempt, Piri said she is pleasantly surprised to see such displays of party unity: ''I'm pleasantly surprised by the unity of the political parties. Even though there are many disagreements, for the first time we are at least seeing a willingness to have dialogue. The joint declaration of the four parties in Turkey's Parliament on July 16 surprised many of us. I hope all the committees that have been set up for constitutional change and for the investigation into the coup attempt are the strong faces of unity. In that respect, I think that perhaps we underestimated Turkish political parties."

With regard to implementation of the visa liberalization deal and the fate of the EU-Turkey readmission agreement, Piri said that due to the current state of emergency, they do not expect Turkey to amend anti-terrorism legislation, emphasizing that the EP will certainly continue to pressure Turkey regarding the fulfillment of the 72 criteria. ''We have to find a way forward on this issue. I think that in general it is very important for our relationship [that we find ways to] move forward while showing trust."

Piri said: "We have to look into various options; perhaps postponing the date [for visa liberalization]. We have to [identify what is certain] and [what are the exceptions], and start with visa liberalization for a small group of people such as students or businessmen."

Clarifying the EU stance regarding a legal amendment to the definition of terrorism, Piri stressed that this change does not mean that people in Europe want Turkey to lower its capacity to deal with the terrorist threat. ''There is a clear threat of terrorism and we're not asking the government to be unable to deal with that threat. But we are [concerned] that the scope of the legislation is so broad that people from different professions are being sentenced based on this anti-terrorism legislation."