EU accession talks could be put to a referendum by the end of the year, Erdoğan says 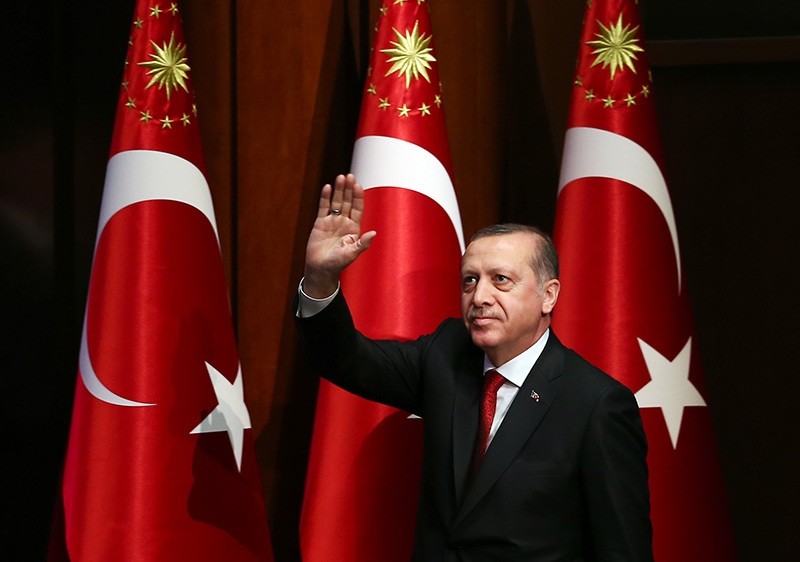 President Recep Tayyip Erdou011fan waves to the audience before giving a speech at the Beu015ftepe Presidential Complex in Ankara, on Nov. 14. (AA Photo)
by Daily Sabah with Agencies Nov 14, 2016 12:00 am

The question on whether to continue accession talks with the EU could be put to a referendum by the end of the year, President Recep Tayyip Erdoğan said on Monday.

Erdoğan's words came after European Parliament President Martin Schulz said that Turkey may face economic sanctions over its recent terror-related operations, instead of terminating its EU accession talks. He also said accession negotiations would come to an end if Turkey reintroduced the death penalty.

Erdoğan slammed Schulz's remarks and said that Turkish people could decide over the fate of the accession talks. "You say 'we'll stop the accession talks', well, you are late. You should decide right away. And I say, as president, that we should show patience until the end of the year. Then we will ask the issue to the nation. Doesn't sovereignty unconditionally belong to the nation? We should ask the issue to the public, the final decision will be given by [our people]," Erdoğan said.

He also harshly criticized Schulz's authority for his remarks against Turkey.

"Who are you? Since when do you have the authority to decide for Turkey? How can you - you who have not accepted Turkey into the EU for 53 years - make such a decision?" Erdoğan said. "This nation makes its own decisions, cuts its own umbilical cord."

Erdoğan also said he would approve reinstating the death penalty - a move that would likely end any hope of Turkish membership in the EU - if parliament passed a law on it, and said that too could be part of a referendum.