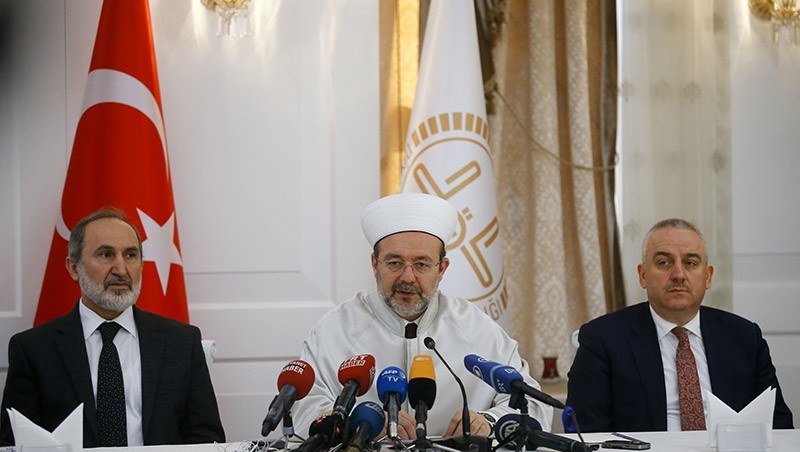 The Presidency of Religious Affairs (DIB) head Mehmet Görmez exclusively met with media members on Friday amid the German police's recent raids on the homes of four clerics affiliated with Turkish Religious Affairs. The raids were based on allegations of espionage. Görmez strongly opposed the German officials for their "baseless and delusory" allegations and said, "It is unacceptable that Islamophobia is being used as a tool during the election atmosphere."

Upon a warrant issued by the Federal Public Prosecutor's Office, German police conducted raids on the houses of four Turkish-Islamic Union for Religious Affairs (DITIB) workers in the states of North Rhine-Westphalia and Rhineland-Palatinate. The Federal Public Prosecutor's Office (GBA) said in a statement that the imams had acted on an order issued on Sept. 20, 2016 by the Turkey-based DIB. However, the DIB immediately denied the accusations of espionage once the issue surfaced, while noting that such an order has not been sent. During the meeting with journalists on Firday at the DIB headquarters in Ankara, Görmez affirmed that the German allegations of the Turkish clerics were part of "perception management" and described it as a "political polemic."

"Both our presidency, our religious officials and the DITIB have been a target of defamation and we take great offence," he added. Stressing that the allegations against the religious officials can harm Turkish-German cooperation, as well as bilateral relations between the two countries, Görmez affirmed: "Using religious officials and religious organizations as tools for domestic politics with baseless and delusory allegations is unacceptable. It is evident that the claims and the statements made in Germany are intentional and futile… These incidents have inflicted a moral and conscientious wound not only the 3 million Turks residing in Germany, but also to the more than 5 million Muslims in Germany."

Görmez said the Diyanet had shared information with the German authorities and six clerics who "exceeded their authority" were returned to Turkey "as a gesture of goodwill despite never participating in any act of intelligence-gathering or espionage."

He added: "The Directorate of Religious Affairs has always respected the legal norms applicable to religious legal entities with which it maintains contact."

While Görmez noted that the DIB has "political impartiality" as one of its fundamental principles, he reminded the media that the DIB "categorically separates itself from radical structures as well as terrorist groups … in efforts to prevent such allegations." He urged the German officials at every federal level to do their parts sensibly and said to "end this unreasonable and pointless process what disregards the gains and experiences obtained over the 40-year span of cooperation with the DITIB." Pointing out the rising Islamophobia and racism worldwide, Turkey's top religious official touched upon the world's "inability to manage multiculturalism." Görmez also stressed that such allegations and raids "make no contribution to building the future" of the two countries. He ended his remarks by saying that he believes that these incidents are "temporary."