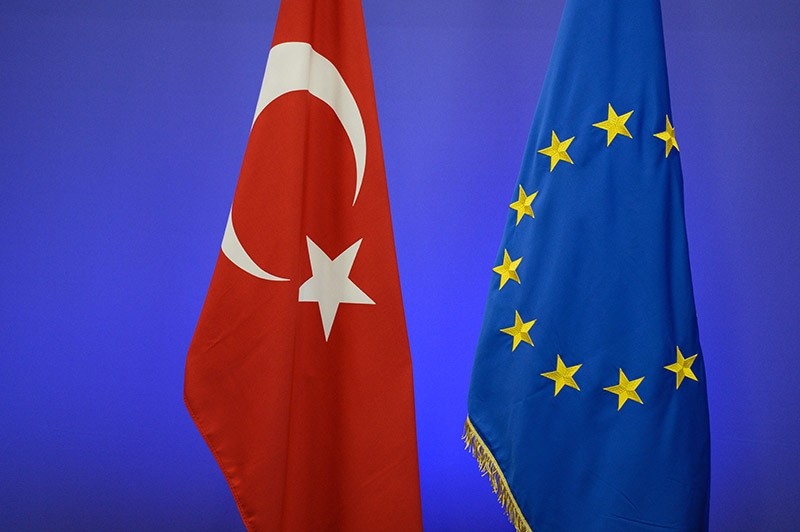 This file photo taken on November 29, 2015 shows the Turkish national flag (L) and the EU flag ahead of a summit on relations between the European Union and Turkey and on managing the migration crisis in Brussels. (AFP Photo)
by Daily Sabah Apr 21, 2017 12:00 am

According to a survey conducted by German state broadcaster ARD, almost two-thirds of German citizens who participated in the poll, expressed their wish to end Turkey's accession negotiations regarding an EU membership.

The "Deutschlandtrend" survey results showed that 64 percent of participants preferred the German government put an end to Turkey-EU negotiations, while 28 percent were against such a measure. The remaining eight percent did not provide any information.

The survey also examined German citizens' view on dual citizenship given to those with an immigration background.

A clear majority of 58 percent of the survey participants argued against dual citizenship, while 38 percent supported the current application.

The age of the survey participants played an important role in their answers, as more than half of the younger citizens were positive about dual citizenship, whereas participants older than 65 mostly rejected the concept.

According to current German law, children with an immigration background, born after 2014, have the right to obtain dual citizenship. Statistics from 2015 showed that 1.7 million German citizens own more than one passport.

Previously this week, conservative party Christian Democratic Union of Germany (CDU) demanded concrete formulations for changes in the German citizenship law for its electoral program after Turkey voted in favor of a constitutional reform package on April 16.

CDU politician Thomas Strobl said in an article for the German daily Die Welt on Wednesday that Germany should enforce consequences for the dual citizenships of Turkish citizens living in Germany.

"I think it is wrong to have dual citizenship over generations," Strobl said.

Strobl demanded that at least second generation individuals, who were born in Germany, should be required to choose one nationality. This would mean a return to the practice of option obligation for the grandchildren of immigrants, which was abolished by the grand coalition in 2014.

A total of 63 percent of Turkish citizens living in Germany, who participated in Turkey's referendum, voted in favor of the 18-article bill promising a wide range of constitutional changes.