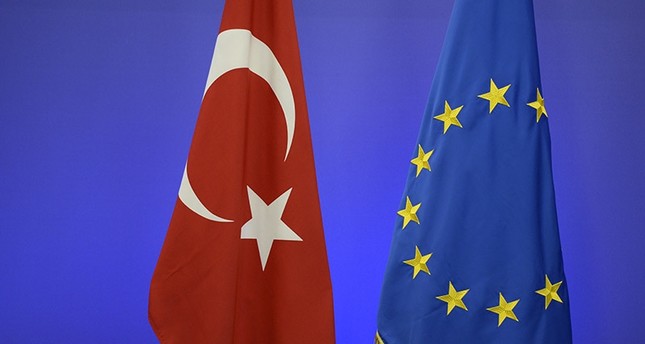 The Turkish national flag (L) and the EU flag are pictured ahead of a summit on relations between the European Union and Turkey and on managing the migration crisis, on November 29, 2015 in Brussels. (AFP Photo)

George Katrougalos, the Alternate Minister of Foreign Affairs of Greece, said Thursday that halting EU accession talks with Turkey would be a "big mistake."

Speaking to a private radio channel, Katrougalos commented on the bilateral relations between Turkey and Greece, and stated that any tension would harm both countries' citizens.

"Greece will not be party to any activity that creates tension with Turkey in the Aegean Sea," Katrougalos said.

The Greek foreign affairs minister also compared current relations between Turkey and the EU to "arm wrestling," adding that some European countries were using these relations for their own domestic policies.

Recalling the latest decision of the Parliamentary Assembly of the Council of Europe (PACE) to put Turkey on a political monitoring watch list, Katrougalos said that this would only worsen relations with neighbor countries and stability in the region.

During its Spring plenary part-session on April 25, PACE decided to re-open the monitoring procedure in respect to Turkey, which has been under post-monitoring dialogue since 2004.

The decision was taken following Turkey's April 16 referendum on constitutional reforms, and drew harsh criticism from many politicians, who called it "politically motivated" and "unjust."