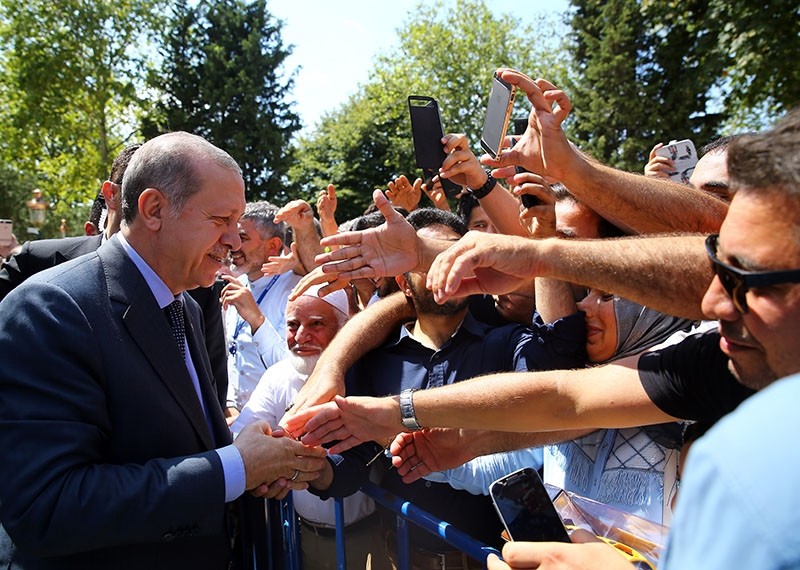 Amid the ongoing diplomatic spat with Germany, President Recep Tayyip Erdoğan has called on the Turkish-German community in Germany to not to vote for parties that have a hostile stance on Turkey in the upcoming elections, including German Chancellor Angela Merkel's Christian Democrat Party (CDU) and coalition partner Social Democratic Party (SPD) headed by former European Parliament President Martin Schulz.

Speaking to reporters after Friday prayers in Istanbul, Erdoğan said: "I call on fellow Turks in Germany not to vote for the CDU, the SPD or the Greens, which are all hostile to Turkey. Support those who are not enemies of Turkey," adding that these parties should be "taught a lesson" at the ballot box in the upcoming elections on Sept. 24, in which Merkel will be running for a fourth term.

There are an estimated 3 million people in Germany's Turkish-German community, of which some 1 million are eligible to vote in the elections.

Commenting on Erdoğan's remarks, Daily Sabah columnist and a former member of European Parliament Ozan Ceyhun said the best option for Turkish-Germans is to boycott the elections.

"They can choose to support a candidate who they may think is the best option for their community. However, the best option seems to be boycotting the elections in the face of such a heightened anti-Turkey stance," Ceyhun said.

Tensions between Ankara and Berlin have increased recently as Turkey blames Germany for turning a blind eye to activities within its borders of groups Turkey considers to be terrorist organizations, including the PKK, which is listed among the outlawed groups by the U.S. and the EU, as well as the Gülenist Terror Group (FETÖ).

German politicians have criticized Ankara for the detention of a German national as part of antiterrorism investigations and operations. Merkel and other German politicians have said recently that the EU customs union agreement should not be updated with Turkey, which Turkish officials responded to saying Berlin uses the customs deal as a political tool against Turkey and is dictating Turkish-EU ties for Germany's short-term political interests.

Answering questions regarding Merkel's statements on suspending the talks with Ankara to improve the customs union deal, Erdoğan said that it was up to Germany to reduce tensions between the countries in the ongoing spat, not Turkey. He said that Germany constantly brought its domestic political rivalry to relations with Turkey by dragging other countries along, becoming a country violating the European Union acquis.

Ankara has blamed the recent row with Berlin on upcoming elections in Germany and what Turkish officials call German politicians' populist rhetoric ahead of the elections.

Regarding reports claiming that FETÖ member Adil Öksüz, who Ankara believes to be the key civilian figure behind the July 15 coup attempt, was spotted in Germany, Erdoğan said that Turkey sent a diplomatic note to German authorities and expects them to carry out necessary steps.