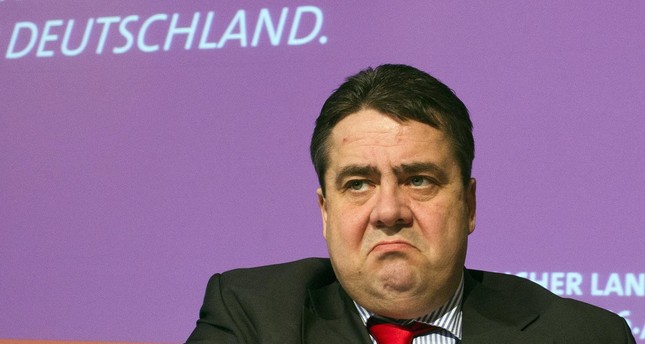 The German Foreign Minister's allegations were quickly dispelled when police found out that a German citizen who disapproves of Gabriel's party policies was responsible for the threats.

Deputy Prime Minister Bekir Bozdağ criticized German Foreign Minister Sigmar Gabriel for his baseless allegations aimed at the Turkish president, adding that the allegations stem from an "Erdoğan complex" that degrades Gabriel and the German nation. "Mr. Gabriel has lied not only to the German nation but also to the world and the Turkish nation. Gabriel's attitude was extremely disrespectful. It is a significant incident that shows German politicians' attitude," Bozdağ told reporters on Aug. 26 at the AK Party's Advisory Council in Çorum, referring to the German minister's recent claims that his wife was subjected to threats because of President Recep Tayyip Erdoğan.

"Obviously, Erdoğan's attitude and stance motivates some people to threaten and insult my wife," said Gabriel, openly blaming President Erdoğan. The minister's wife, who is a dentist, was reportedly received threatening messages.

But the foreign minister's allegations were dispelled in a short time when police found out that a German citizen who disapproved of Gabriel's party policies was responsible for the messages, clarifying that the incident had no relation to President Erdoğan. Even though his allegations were proved baseless, Gabriel has not yet made any comment about his false statement.

Commenting on the incident, Bozdağ said, "A foreign minister should not share an obvious lie with the public as information." Bozdağ said that some politicians in Germany have an "Erdoğan complex" and follow policies accordingly. Pointing to Gabriel's baseless allegations toward President Erdoğan, Bozdağ said: "They are also a cause of humiliation to the German nation. They should get rid of the Erdoğan complex — it is not beneficial for you."

Ankara considers the upcoming elections the underlying cause of the current strained relations with Germany. The Federal Parliament (Bundestag) elections will be held Sept. 24 in Germany. As the election date approaches, some German politicians have intensified their rhetoric against Turkey. In particular, Gabriel's statements and his derogatory language towards the Turkish president have been strongly criticized by Turkish politicians. Foreign Minister Mevlüt Çavuşoğlu said in Poland on Aug. 25, "Germany must be careful about how it conducts foreign policy with Turkey," adding that a populist approach would not solve problems.

Stressing that Turkey should not be dragged into Germany's internal politics, Deputy Prime Minister Bozdağ criticized German politicians on the grounds that they have nothing to provide for their public and therefore have made Turkey a subject of their politics. "(You) should try to work for your country and the public. Tell the public what you will provide after the elections. However, it seems that German politicians do not have anything to talk about concerning what they will provide for the German nation."

Bozdağ said that it is not possible for German politicians to build the future of Germany, while harming relations with Turkey and insulting the Turkish nation. "I believe that the German nation should evaluate in their choices disrespectful policies and politicians who do not know their places. We know that Germans are intelligent people. They would know best that bad results might be caused by politicians who have a complex," he added.

Tensions between Ankara and Berlin have increased as Turkey blames Germany for turning a blind eye to activities within its borders by groups considered to be terrorists by Turkey, such as the Gülenist Terror Group (FETÖ) and the PKK, which is listed among outlawed groups by the U.S. and EU.

German politicians have criticized Ankara for detaining a German national as part of anti-terrorism investigations and operations. Merkel and other German politicians recently said that the EU Customs Union agreement should not be updated with Turkey, while Turkish officials responded that the customs deal is being used as a political tool against Turkey.

Share on Facebook Share on Twitter
Previous in EU Affairs European Commissioner for Budget and Human Resources Günther Oettinger... Next in EU Affairs In order to gain an advantage in the upcoming elections, German politicians...
DAILY SABAH RECOMMENDS