We should not quarrel in front of Erdoğan, Merkel tells EU 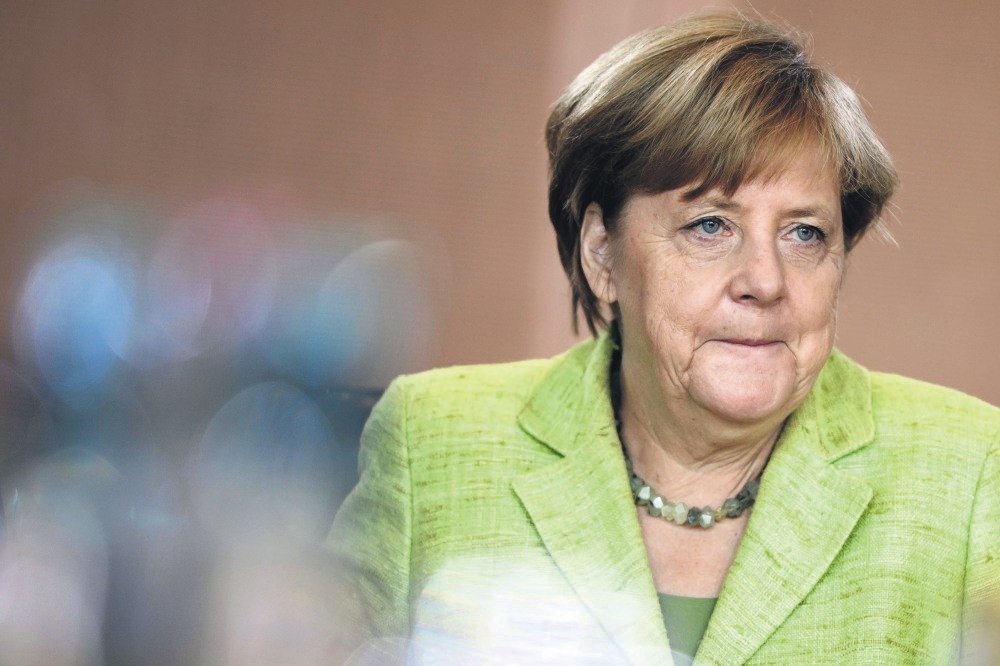 Chancellor Merkel and her Christian Democrat (CDU/CSU) bloc have long-opposed Turkey's full EU membership but supported the continuation of accession negotiations in an open-ended way,.
by Daily Sabah Sep 07, 2017 12:00 am

The German chancellor stressed that she would like to discuss future relations with Turkey with the other heads of state and government. Yet, having a quarrel before Erdoğan would weaken Europe's position, she added

Angela Merkel called on the European Union not to quarrel with the German government in front of President Recep Tayyip Erdoğan after EU High Representative for Foreign Affairs and Security Policy Federica Mogherini disputed with her on the issue of ending Ankara's EU accession talks. "If Europe were to publicly quarrel before the eyes of President Erdoğan, this would dramatically weaken the European position," Merkel said in her speech before the general elections in the German parliament on Tuesday.

The German chancellor stressed that she would like to discuss future relations with Turkey with the other heads of state and government. In a televised election discussion, Merkel said that Turkey would never join the EU, and the accession talks should be ended."I don't see them ever joining and I had never believed that it would happen," she said.

"The fact is clear that Turkey should not become a member of the EU," Merkel said after Martin Schulz said he would stop Turkey's bid to join the EU if he was elected chancellor. "Apart from this, I'll speak to my colleagues to see if we can reach a joint position on this so that we can end these accession talks."

"We are continuing to talk with Turkey," Mogherini said. "We do not always agree on everything. There are some issues… that are taking our positions very much apart, but talks continue."

Mogherini's statement was interpreted by some as a difference of opinion between Brussels and Berlin.

Any decision to end Turkey's membership talks would require unanimity among all EU member states, which is far from certain, as several countries remain strongly opposed calls earlier this year, and insist on maintaining dialogue with Ankara.

The German chancellor and her Christian Democrat (CDU/CSU) bloc have long-opposed Turkey's full EU membership but supported the continuation of accession negotiations in an open-ended way, something that was promised to Ankara before the CDU/CSU came to power in 2005.

Tensions between Berlin and Ankara further escalated last week after the arrest in Turkey of two German citizens of Turkish descent on suspicion of supporting terrorist groups.

Since the July 2016 defeated coup attempt in Turkey, more than a dozen German citizens have been arrested on suspicion of providing support to illegal or terrorist groups.

While Merkel and German politicians demanded their immediate release, Turkish authorities repeatedly stressed that the country's judiciary is independent, ruling out any political influence on legal procedures.Ties between Ankara and Berlin have been going south since the defeated coup attempt, as Turkish leaders slammed Germany for turning a blind eye to outlawed groups and terrorist organizations hostile to Turkey.To send a message to German parties taking a negative stance toward Turkey, President Erdoğan called on the Turkish-German community in Germany to not vote for parties that have a hostile stance on Turkey in the upcoming election.

"I call on fellow Turks in Germany not to vote for the CDU, the SPD or the Greens, which are all hostile to Turkey. Support those who are not enemies of Turkey," he said, adding that these parties should be "taught a lesson" at the ballot box in the upcoming elections on Sept. 24, in which Merkel will be running for a fourth term.

The president said that Germany constantly brought its domestic political rivalry to relations with Turkey by dragging other countries along, becoming a country violating the European Union acquis.