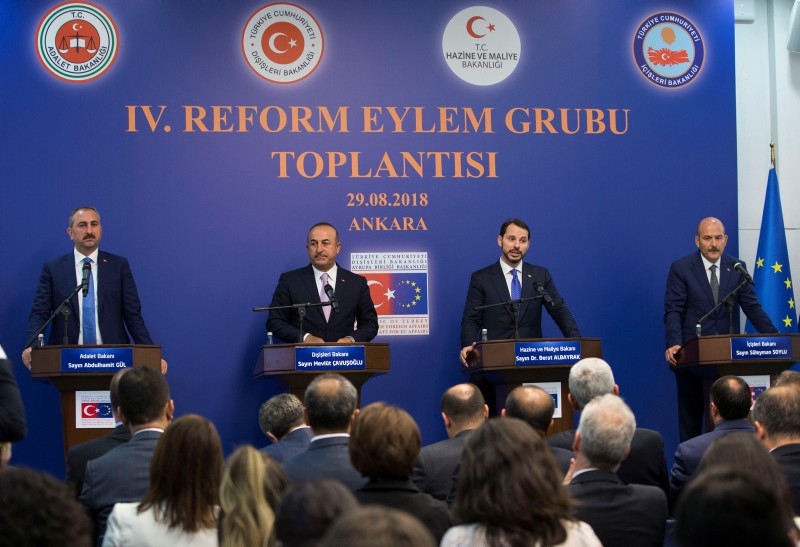 Turkey will prioritize reforms linked to its European Union accession process in the coming period and expects to see results from its efforts, including on the issue of visa liberalization, according to Foreign Minister Çavuşoğlu's remarks that came after the Fourth Reform Action Group meeting held with the participation of three other ministers.

Justice Minister Abdulhamit Gül, Treasury and Finance Minister Berat Albayrak and Interior Minister Süleyman Soylu were other ministers that participated to the meeting held by the Presidency of the European Union at the Ministry of Foreign Affairs in Ankara.

In a joint press conference, Çavuşoğlu said that Turkey will work on accelerating political reforms, focusing on the judiciary, freedoms and fundamental rights.

The group, formerly called "Reform Monitoring Group," convened for the first time since the transition to the presidential system with the June 24 presidential and parliamentary elections.

Çavuşoğlu said that reforms will be implemented much faster in the presidential system thanks to less bureaucracy and more effective decision-making mechanisms. He added Turkey will work much closer with the Council of Europe in the upcoming period.

Talks to modernize the Customs Union agreement between Turkey and the European Union, which have been stalled, must start again, Çavuşoğlu added.

He also said Turkey did not expect new chapters to be opened regarding its EU accession talks while Austria has the term presidency of the bloc.

Treasury and Finance Minister Berat Albayrak praised the supportive statements from the EU countries against "the process that has been launched by the U.S. since the beginning of August targeting the Turkish economy."

Commenting on the issue of upgrading the customs union, Albayrak said it would be a win-win for both sides. The fifth meeting will be held on Dec. 11 at the Justice Ministry.

Reform Action Group meetings have been monitoring the implementation of Turkey's reforms on the way to EU accession based upon political criteria, judiciary, civil liberties, freedoms and security chapters. So far, 33 meetings have been held for that purpose.

The strained ties between the EU and Turkey, particularly after the July 15, 2016, failed coup attempt, practically stalled the accession process. Ankara's ties with some European countries were strained after the EU did not put forth the support Turkey expected following the coup attempt. The EU criticized Turkey for the extended state of emergency and claimed Ankara was moving away from the EU. Negotiations with the EU were started on Oct. 3, 2005, and 16 chapters out of a total 35 were opened. The last chapter was opened in June 2016.

Turkey-EU relations have recently improved after some European countries voiced their support for Turkey in the face of U.S. sanctions. In recent weeks, EU leaders, including French President Emmanuel Macron and German Chancellor Angela Merkel, have also highlighted the importance of maintaining strong ties with Turkey. On Aug. 16, Macron in a phone call with Erdoğan discussed bilateral economic relations. He highlighted the importance of stability in the Turkish economy. Earlier on Aug. 15, German Chancellor Merkel also talked with President Recep Tayyip Erdoğan over the phone. She said the strength of the Turkish economy is also important for Germany, according to presidential sources. Both leaders reportedly asserted their commitment to strengthening Turkish-German cooperation with more high-level talks and visits.

Erdoğan will travel to Germany on Sept. 28 for a two-day state visit, where he is expected to hold talks with Merkel. Ankara has also signaled that it prioritizes the reform process while expecting the EU to take positive steps on some key issues, including the upgrading of the customs union, and visa liberalization.

In March 2016, Brussels and Ankara reached an agreement to take stricter measures against human trafficking, discourage irregular migration over the Aegean Sea and improve the conditions of Syrian refugees in Turkey. The agreement also promised acceleration in Ankara's EU membership process and visa-free travel for Turkish nationals in the Schengen zone, provided that Ankara fulfills a list of 72 criteria set out by Brussels.

The 28 EU member states and the European Parliament must also approve the visa scheme. The RAG meetings play a significant role in preparing proposals for political reforms and in the process of implementing them. The last of the RAG meetings was held on Dec. 11, 2015. In the EU accession process, within the framework of the 23rd chapter of the "Judiciary and Fundamental Rights," and the 24th chapter of "Justice, Freedom, and Security," various meetings were held in order to ensure that the reforms are being implemented in the most efficient way.