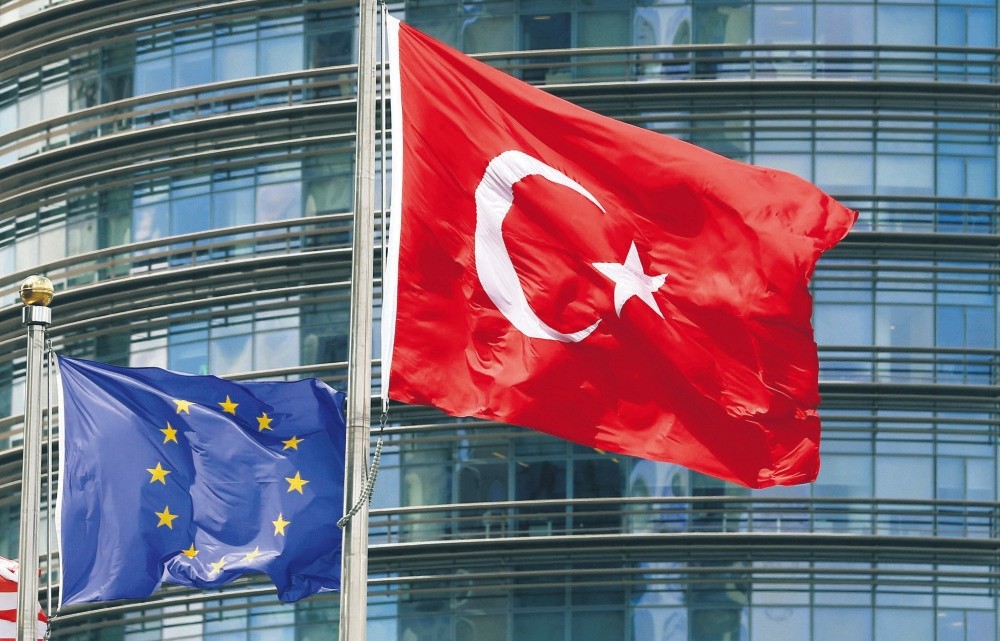 In order to become an EU member, Turkey, which started accession talks in 2005, must successfully conclude negotiations on 35 policy chapters and implement certain reforms.
by daily sabah
Oct 06, 2018 12:00 am

While taking significant steps toward mending battered ties with EU members, Ankara expects to accelerate the process. Experts, on the other hand, state that taking tangible steps would help reach full momentum in mending relations

Ankara's expectation of concrete steps and transparency in relations with the European Union in the upcoming period remains unchanged amid recovering relations with member countries. Acknowledging that an instant recovery in the EU process is unlikely, experts highlighted that focusing on taking tangible steps would help reach full momentum. Turkey has been recently taking significant steps toward mending battered ties with EU member countries while also seeking to boost its stalled ties with the bloc. Karel Valansi, a columnist at the Şalom newspaper, stated that "the recent developments with EU member countries and President Recep Tayyip Erdoğan's recent visit to Germany have been positive signs showing that the relations between the Brussels and Ankara were not ruptured."

Valansi added that she expects that the positive steps from both sides will continue.

Stressing that Turkey's EU process has been continuing for a very long time, Valansi said that if the necessary steps are taken, the normalization process in bilateral ties would gain momentum.

"The first thing to do is the upgrading of the customs union; Germany should lift its veto," Valansi said, adding that it would create a positive atmosphere in EU ties.In his first official trip to Germany as Turkey's head of state last week, President Erdoğan underscored that Turkey is ready to leave the tensions behind and improve ties, while Chancellor Angela Merkel voiced Germany's desire to increase cooperation with Turkey in various fields.

"It put us in a stronger position that we kept our promises [toward the EU] despite unjust treatment. It is out of the question for us to turn our backs on a region that is our biggest trade partner and where five million of our brothers of Turkish-descent live," Erdoğan said on Monday during the opening of the second legislative year of the 27th term of Parliament.

"Positive messages from several EU countries signal bright days ahead [in relations]. We will enter a period where we expect a lot of progress in political, economic and humanitarian areas," he added.

Another positive development regarding Turkey's relations with EU member states was the visit of Dutch Foreign Minister Stef Blok. During the meeting with Foreign Minister Mevlüt Çavuşoğlu, Blok stressed that the Netherlands welcomes the new period with Turkey.

In their joint press conference Çavuşoğlu stressed, "There have been ongoing joint efforts about visa liberalization and customs union with the EU and the support of the Netherlands is significant."

Emre Gönen, an academic from Istanbul Bilgi University, stated that there have been positive developments regarding the relations with the EU member countries and that it is not possible for these countries to have hostile relations toward Turkey.

In relation to the cooperation between the two sides, Gönen stated Turkey and the EU have been successfully working on the refugee deal. He highlighted that this shows that when there are mutual interests the sides are able to work together.

Turkey and the EU signed an agreement on March 18, 2016, to stem the influx of refugees to Europe. Turkey has been a main route for refugees trying to cross into Europe since the beginning of the civil war in Syria. With the agreement, irregular arrivals decreased by 99 percent, saving the lives of many of those who would have attempted the treacherous journey by sea. The agreement also foresees an acceleration of Turkey's EU talks and developments in visa liberalization.

Touching on Turkey's EU process, Gönen said that previously the EU did not fulfill its promises to Turkey, and he added, "There are many expectations from Turkey that needs to be fulfilled as well."

Turkey's accession talks which began in 2005 were stalled in 2007 due to objections from the Greek Cypriot administration regarding the divided island of Cyprus.

In order to become an EU member, Turkey must successfully conclude negotiations on 35 policy chapters and implement some reforms. In December 2016, the EU member states rejected opening new chapters.

Meanwhile, Erdoğan also criticized the long-stalled bid to join the EU, expressing the exasperation caused by the sluggish process on Thursday. He said in Istanbul that the government might consider a referendum as there have been no concrete developments regarding the issue.

With an aim of turning a new page in the process, Turkey decided in the Reform Action Group (RAG) meeting in September to implement new reforms.

Commenting on Turkey's decision, Valansi highlighted that the implementation of the reforms will substantially contribute to the process.

According to the RAG meeting, Turkey will prioritize reforms linked to its European Union accession process in the coming period and expects to see results from its efforts, including on the issue of visa liberalization. Ankara promised to work on accelerating political reforms, focusing on the judiciary, freedoms and fundamental rights.