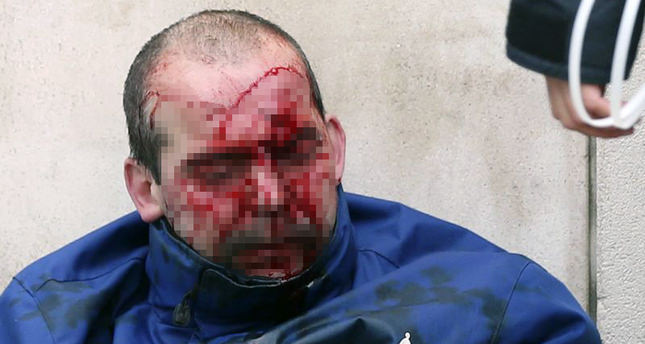 More than 25,000 people took part Friday in a European trade union demonstration in Brussels against austerity, while more than 20 people were injured in the protest that at times turned violent

BRUSSELS — The protest in Brussels, in which thousands took part peacefully, was called by the European Trade Union Confederation to oppose austerity measures implemented across the 28-country European Union.

As well as paralyzing traffic in the Belgian capital, the demonstration sent the U.S. Embassy into lockdown as the American ambassador to the EU, Anthony L. Gardner, was conducting an unrelated briefing for journalists.

Embassy staff said it was the first lockdown they could recall in years. At one of the protest hot spots, near the European Union headquarters buildings, longshoremen from the Belgian cities of Antwerp and Ghent clashed with riot police.

Police said one demonstrator was hurt when a rock he was trying to throw hit him on the head instead. Associated Press reporters saw several people who had been injured, including a policeman apparently struck by a cobblestone.

Organizers had expected 40,000 people to take part in the demonstration, but Brussels police spokeswoman Ilse Van de Keere estimated the turnout at about 25,000.

A "minority" of demonstrators were aggressive, throwing objects including stones and barriers, and "anything they could find," said police commissioner Ilse Van de keere.

The demonstration passed the US embassy, where some protesters were seen hurling stones and firecrackers towards police. The embassy was placed under lockdown.

Police officers used water cannon in the area near the embassy - located close to the royal palace - and around the European Union institutions headquartered in Brussels, according to police and witness reports. 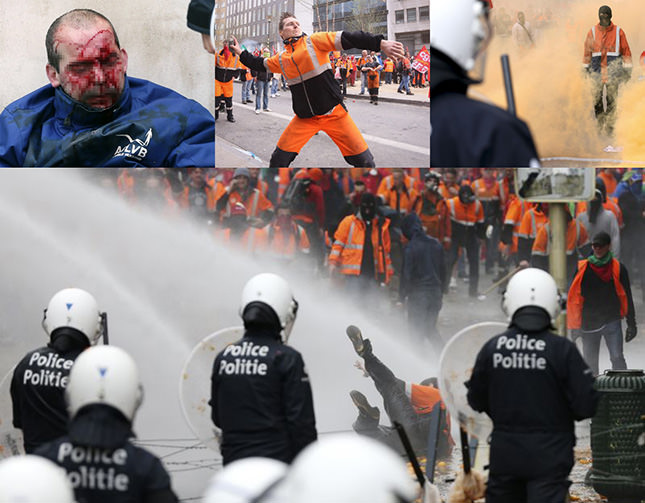 Belgian broadcaster RTBF described demonstrators marching among a "forest" of red flags, and throwing bins at the police. Several demonstrators were masked, according to witnesses.

The demonstration was organized by the European Trade Union Confederation (ETUC) to protest against austerity measures prescribed in response to Europe's economic crisis.

"Austerity is not working. Austerity is causing a mounting social and economic crisis: over 26 million Europeans are jobless," ETUC leader Bernadette Segol said ahead of the demonstration, demanding "a new path for Europe, based on investments, quality jobs and equality."

Anger at EU austerity measures is expected to prompt a voter backlash in European elections on May 22-25, with large gains predicted for extremist and eurosceptic parties.