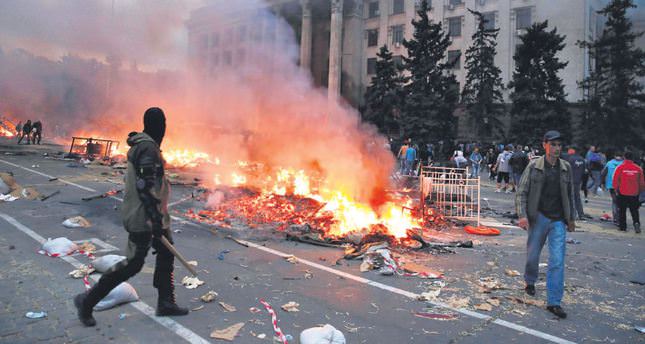 Continuing brutal clashes between the Kiev government and pro- Russian militant groups caused many deaths in eastern Ukraine, while deteriorating relations between Russia, the EU and the U.S.

UKRAINE — Two days after the death of 46 in clashes in Odessa, pro-Russian militants storm the police headquarter in the city and release dozens of people. As violence around the country escalates, experts warn that there could be no going back to a peaceful coexistence despite the proposed presidential elections at the end of the month. The crisis in Ukraine has spread to many cities under rebel control in the south and the east of the country as violent clashes between supporters and opponents of the Ukrainian government have led people to be killed. Last Friday, people in the southwestern Ukrainian port city of Odessa witnessed a violent clash. According to authorities, 46 people were killed, more than 200 people were arrested, and many more injured on Friday night. The day put its stamp on Ukrainian history as the bloodiest day since the beginning of the crisis. It was expected that after the release of the seven European military observers captured by pro-Moscow rebels in eastern Ukraine on Saturday after more than a week of captivity in the city of Slavyansk that ongoing tensions would ease.

However, the last two nights became unforgettable nights in the memory of Ukrainians. Apart from Odessa, the clashes spread along the eastern region on Saturday, resulting in more deaths. In the eastern city of Lugansk, pro-Russian groups attacked local government building and two officers were injured. After the clashes ended, people in central Slayvansk woke up to a relatively calm Sunday, but it has been reported that there is increasing difficulty obtaining basic foodstuffs. In the eastern Ukrainian city of Donetsk, pro-Russian demonstrators seized a government building, and they raised their own flag of the Donetsk People's Republic to the main government building. The creation of a sovereign people's republic of Kiev's rule was proclaimed on April 7 by pro-Russian separatist groups. Donetsk separatist groups stated that they will declare their independence on May 11. It is expected that after the independence of the city of Donetsk, many more eastern cities - Odessa, Lugansk and Slayvansk - would be heading to create their own sovereignty, thereby declaring their independence.

Eşref YalınKılınçlı, in his statement, points out the importance of the effect of a possible declaration of independence of the city of Donetsk to the other turbulent eastern cities where the brutal clashes cannot be halted by the Kiev government. He also stressed that there is no way for Ukraine to keep these cities under the control of the Kiev government. "Ukraine will lose Donetsk, as it lost Crimea.
This will continue with Slovensk and Odessa," said Yalınkılıçlı. His statements prove that Ukraine would enter into a difficult political phase with growing discontent from its people residing in the east and the south of the country.

Two days after the violence, Ukrainian Prime Minister Arseniy Yatsenyuk held a press conference during his visit to Odessa. "Russia's aim was to repeat in Odessa what is happening in the east of the country," said Yatsenyuk.

He accused the Russian government of helping militant groups to attack government buildings, leading the country to enter into a state of civil war. According to Yatsenyuk, Russian's support for militant separatist groups aims to destroy Kiev government control over the turbulent region of the country while decreasing the impact of the EU and the U.S. in the region. The long-lasting problem between Russia and the U.S. over the crisis in Ukraine reflects that both countries want to make use of the ongoing situation in their favor. The last phone call made between Russian Foreign Minister Sergei Lavrov and U.S.

Secretary of State John Kerry indicates that there is a long way to go for both countries to come to an agreement over this significant issue. Lavrov, during the phone conversation, highlighted the need for a greater mediating role for the Organization for Security and Cooperation in Europe (OSCE). This statement proves that the Russian government did not want the U.S. to intervene in Ukraine's politics and leave the country on its own to deal with its domestic issues. The Geneva pact, an agreement between the U.S., Russia, Ukraine and the EU reached on April 17 reflects the need for compromise between the signatories and the priorities of diplomatic measures, but there is no clear sign that both parties have struggled for defusing the crisis without any military support.

As the Ukrainian presidential election, which will take place on May 25, would prove to be a significant path in determining Ukraine's future, the results would determine which way Ukraine chooses: to continue with a pro-Western government or a Russianbacked government. "What we have seen so far is a conflict between Russia and the U.S.; Ukraine is the one that has been suffering," said Yalınkılıçlı. Regarding the latest developments, it seems that neither way would be able to ease the violent clashes in Ukraine in the long run.