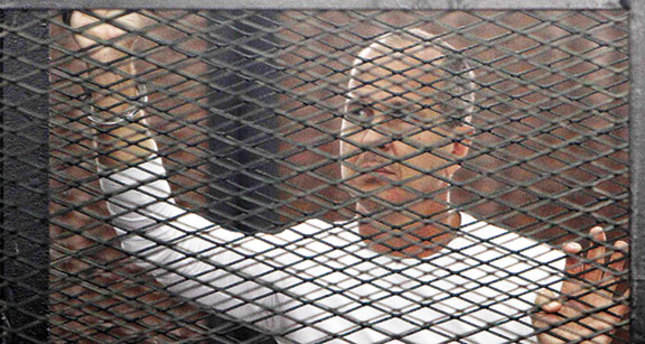 An Egyptian court will rule on Monday in the case of three Al Jazeera journalists on trial for aiding members of a "terrorist organisation" in a case that has raised questions over Egypt's respect for freedoms of expression.

The hearing began on Monday morning.

Australian Peter Greste, Al Jazeera's Kenya-based correspondent, and Canadian-Egyptian national Mohamed Fahmy, bureau chief of Al Jazeera English in Egypt were detained on Dec. 29 at the Marriott hotel room where they were working.

Baher Mohamed, an Egyptian producer was detained at his home a day later. All three have been held at Egypt's notorious Tora Prison for six months, in a case that has drawn criticism from Western governments and human rights groups.

The journalists are accused of publishing lies that harmed the national interest and supplying money, equipment and information to 16 Egyptians. The foreigners were also accused of using unlicensed broadcasting and communications equipment.

The 16 Egyptians are to face trial for belonging to a "terrorist organisation", an apparent reference to the Muslim Brotherhood, which has been protesting against the government since the army toppled Islamist president Mohamed Mursi in July.

Fahmy's brother Adel, who was at the hearing, said this was "the perfect chance" for the new Egyptian authorities to show their respect for freedom of expression with an acquittal.

"It's an opportunity for Egypt to prove to the international community that they encourage and welcome freedom of expression in this new era," he said. "There's no evidence against them. After 12 hearings there is nothing to condemn them with."

Al Jazeera's Cairo offices have been closed since July 3 when security forces raided them hours after the army ousted Mursi following mass protests against his rule.

Western governments have voiced concern over freedom of expression and press freedom in Egypt since Mursi's ouster and the crackdown has raised questions about Egypt's democratic credentials three years after an uprising toppled Hosni Mubarak after 30 years in power and raised hopes of greater freedoms.

The ruling was due a day after U.S. Secretary of State John Kerry met newly elected Egyptian President Abdel Fattah al-Sisi in Cairo and discussed the political transition the country.