French lawmakers prepare motion to recognise Palestine as a state 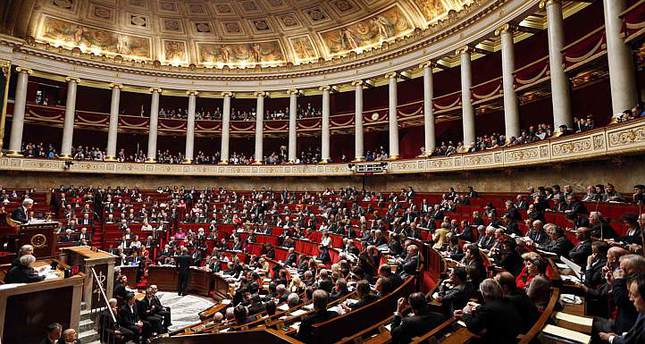 by French Press Agency - AFP
Nov 04, 2014 12:00 am
French Socialist lawmakers are preparing to submit a motion to parliament asking the government to recognise Palestine as a state, sources said Tuesday, weeks after British MPs passed a similar vote.

The planned move follows the collapse of peace talks between Israel and Palestinian territories and this year's conflict in Gaza in which more than 2,000 Palestinians and dozens of Israelis were killed.

"The (lower house National) Assembly asks the French government to use recognition of the state of Palestine as an instrument to obtain a final settlement of the conflict," reads the provisional motion seen by AFP.

A meeting on the lawmakers' proposal is due Wednesday with Foreign Minister Laurent Fabius and Socialist senators who are also planning a similar initiative.

Fabius himself acknowledged last month that Paris would eventually have to recognise Palestine as a state, but wanted to choose the best moment to do so for the move to have a real impact.

The lower house vote could take place within weeks, and while it is unlikely to change government policy immediately, it would be highly symbolic after a similar move by British MPs last month.

The British lawmakers voted overwhelmingly on October 13 in favour of a non-binding motion to "recognise the state of Palestine alongside the state of Israel as a contribution to securing a negotiated two-state solution".

The vote, which Israel warned risked undermining prospects for peace, came after the Swedish government announced it would recognise a Palestinian state -- the first EU member in western Europe to do so.

The Palestinian Authority estimates that 134 countries have now recognised Palestine as a state, although the number is disputed and several recognitions by what are now European Union member states date to the Soviet era.