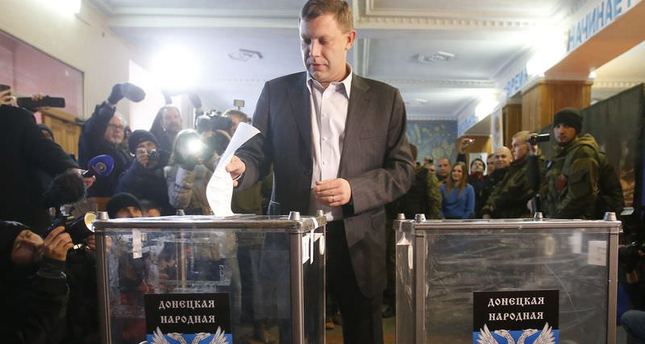 Sunday’s separatist election is a harbinger of the worsening standoff between Russia and the West over Ukraine, as more sanctions are underway for Russia, according to Germany

Sunday's separatist election has been condemned by the Kiev government and the West who rejected the outcome of the "illegal" vote in the restive eastern region, as Russia has suggested . While the Russian Foreign Ministry stated that the election would restore stability in regions unsettled by an armed separatist insurgency, while Western countries believe that it would further strain the tension with Russia, along with deepening the Ukraine crisis. Germany urged Russia to respect Ukraine's territorial integrity and sovereignty while calling for tighter sanctions if the situation in the rebel-held areas worsened.

Meanwhile, Russia urged the Kiev government to hold a dialogue with the rebel representative who had the sole authority to represent the self-proclaimed republics of Donetsk and Luhansk. "In view of the elections, it is extremely important to take active steps toward promoting sustained dialogue between central Ukrainian authorities and the representatives of the Donbass," said a statement released by Russian authorities, as AP news agency reported on Monday. Russia also stated that holding a dialogue with the rebel representative would be the only possible way for the Ukrainian government to ease a six-month separatist rebellion in Ukraine's industrialized east. "This work can bring results only on condition of equal dialogue based on mutual respect, with Kiev renouncing military operations and the notorious 'anti-terror operation'," Russia's Deputy Foreign Minister Grigory Karasin told Russian state news agency Itar-TASS.

The United States voiced its concern over the separatist election calling it "illegitimate and illegal," while urging all nations to support the legal Dec. 7 local elections which will be held under the auspices of the Ukrainian constitution. "The United States will not recognize the results. These elections violate the letter and spirit of the Sept. 5 Minsk cease-fire agreement which calls for elections in the east in line with the Ukrainian law on special status. Any moves to try to legitimize the results will undermine the Minsk agreement," said Jen Psaki, the U.S. State Department spokesperson in a press briefing on Sunday.

As Ukraine is preparing to hold a local election on Sunday, the upcoming election will not take place in the rebel-held areas of the east of the country. After a peace deal under the Minsk Protocol of Sept. 5 and the Minsk Memorandum of Sept. 19, the pro-Russian rebel groups rejected a law granting self-rule to the rebel-held eastern region that was approved by the Ukraine parliament in a bid to end the months-long separatist fighting.

On Sunday, residents in eastern Ukraine favoring independence went to the polls to determine whether they seek independence or joining Russia. "The central election commission deems Alexander Zakharchenko to be the elected head of the Donetsk People's Republic," an election official, Roman Lyagin, told journalists in pro-Russian rebel held Donetsk, as Reuters news agency reported.

Since the cease-fire agreement came into effect in September, the heavy fighting that has continued in the embattled east proves the volatility of the peace talks. The ongoing clashes have turned the city of Donetsk into a combat zone, as rebel groups continue persistent attacks on the Donetsk airport. The ongoing armed conflict in eastern Ukraine has left many people in deteriorating humanitarian conditions as some armed groups continue to terrorize civilians' lives in areas where the conflict has been continuing.