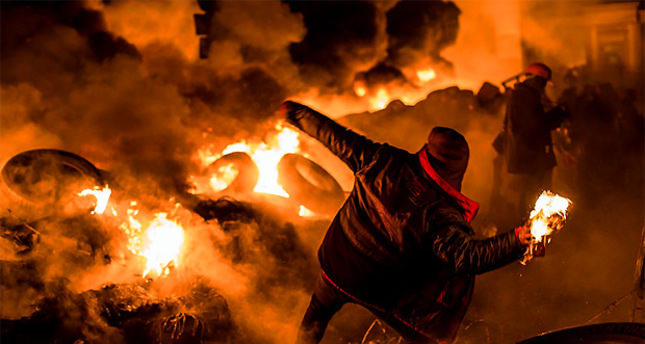 by Daily Sabah Nov 06, 2014 12:00 am
After Sunday's separatist elections, which were condemned by the West as "illegal," the tension between Kiev and pro-Russian separatists continues as both sides try not to undermine the peace process and de-escalation for a peaceful resolution that was agreed to under the Minsk Protocol of Sept. 5 and the Minsk Memorandum of Sept. 19. The two sides have accused each other of not being able to put an end to the unresolved months-long crisis in eastern Ukraine.

Following Kiev's decision to cancel the law on special status of the Donbass region, the self-proclaimed Donetsk and Luhansk People's Republics released a statement on Wednesday saying that Kiev's decision would violate a protocol agreed to in Minsk under which a cease-fire went into effect in east Ukraine.

"Kiev's move to cancel the law on Donbass special status dealt a serious blow to the Minsk negotiations process," said the joint statement released by the pro-Russian separatists, Itar-Tass Russian state news agency reported. However, rebel groups rejected a law granting self-rule to the rebel-held eastern region that was approved by the Ukraine parliament in September as part of a peace deal in a bid to end the months-long separatist fighting. As Ukraine prepares to hold local elections on Sunday, rebels have rejected participation in the upcoming local elections and held their own "illegal" elections to determine whether they want independence or to join Russia.

Meanwhile, the U.S. condemned any attempt that violates Ukraine's sovereignty and territorial integrity while urging for "a path back to the peace process." The crisis can be eased "only if Russia and its proxies fully implement their commitments under the Minsk agreements, including by immediately implementing the cease-fire; removing all foreign troops, weapons, and equipment from Ukraine; returning control of the Ukrainian border back to Kiev and allowing for meaningful monitoring of the cease-fire zone and the international border," said Jen Psaki, the U.S. State Department spokeswoman in a daily press briefing on Tuesday.

Despite the cease-fire agreement, heavy fighting has been continuing in the embattled east. The ongoing clashes have turned the city of Donetsk into a combat zone as rebel groups keep attacking Donetsk airport. Ukrainian President Petro Poroshenko on Wednesday ordered more troops to the rebel-held areas.

Since the fighting erupted in the restive east of the country, at least 3,660 people have been killed and 8,756 wounded in eastern Ukraine, according to the U.N., signaling the deteriorating humanitarian situation in Ukraine.