Pass the salt, not the politics: Catalan families split over independence 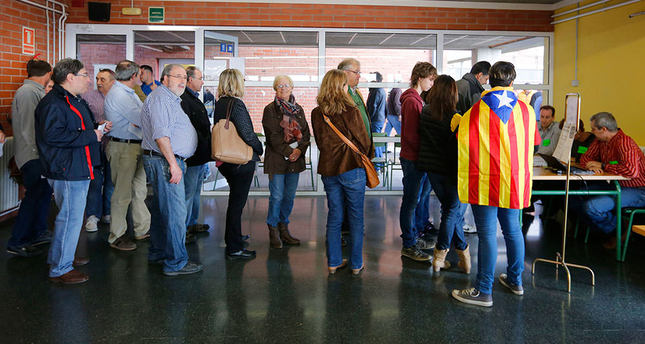 by reuters
Nov 09, 2014 12:00 am
The nine-member of Vecino family is in many ways a close-knit southern European clan. They live minutes from one another, share school runs and enjoy home-cooked rice dishes. But a separatist movement in their native Catalonia has split the Vecinos politically along a generational divide that speaks volumes about why the region's simmering independence drive has resurfaced with gusto in the past two years. The movement, which will be tested in a symbolic and non-binding independence vote in the region on Sunday, has as much to do with the present as with Catalonia's rich cultural past.

Family chief Rafael, a 65-year-old who lived through Spain's 1939-1975 dictatorship, says the country should stay united. He and his son Daniel are among millions throughout Spain who are outraged by an austerity drive that has cut welfare services. The Catalan regional government blames Madrid. Though Daniel works for a global computer firm, he is one of roughly half of Catalans who want a sovereign government for Catalonia's 7.5 million residents, 16 percent of Spain's population. "The independence movement is driven by indignation," Daniel, 41, said, as he munched "panellets", Catalan marzipan sweets, from the living room of his parents' house in a leafy town neighboring Barcelona. "It's not about money, it's about being understood." Hardening Daniel's position is what he calls an authoritarian attitude by Madrid vis-a-vis a region that contributes above its weight to the national budget. Prime Minister Mariano Rajoy has so far denied any negotiation with Catalan politicians on whether they should vote on independence. The government's view is that it must respect the sovereign rights of Spain's total 47 million population, not just one part, and most Spaniards agree with him. Daniel hopes millions will take part in the informal ballot on Sunday to change that. "The (Madrid) government's stance has created disaffection in Catalonia, and its intransigence has pushed more and more people to the independence camp than would ordinarily have happened," said Alejandro Quiroga, reader in Spanish history at Newcastle University.

The separation of Catalonia from Spain would weaken Spain as an economy, severing a region which accounts for one-fifth of Spain's economic output and is home to some of its biggest companies, such as Caixabank and Gas Natural.

Catalonia, along with the northern Basque region, has long been a prosperous and industrial corner of Spain. After decades of importing unskilled labour from rural Andalusia and Extremadura to the south, the region still has a distinct identity from the rest of the country. After Spain exited the dictatorship of Francisco Franco and became a democracy, regional differences have largely flourished. One example: Catalonia has increasingly taught its own language in schools, with the national Spanish tongue given a secondary role.

In 2010, however, limits were put on how far Catalonia's freedom could go. Spain's Constitutional court ruled that a Catalan statute of autonomy, setting out the region's status and powers, was not tantamount to nationhood. After that rejection, Catalan grass roots movements - up until then a minority - multiplied. In 2012, more than a million people attended a Catalan national day rally; the turnout led regional leader Artur Mas to put independence at the top of his political agenda. Since then the positions of Barcelona and Madrid have steadily hardened. Politicians on both sides have talked up the merits and drawbacks of full autonomy, propelling the issue onto the front pages, even as opinion polls showed Spain's 25 percent jobless rate as the population's key worry. Mas has blamed spending cuts on public services and welfare - imposed as Spain tried to get its public finances in order - on central state politicians. He now says Catalonia should take credit for pulling Spain out of recession. "Spain's recovery and generally the southern European recovery has a Catalan accent" he recently told business leaders. In a recent news conference he described Spain as the "adversary."

Madrid, too, has also upped its inflammatory language. Education Minister Jose Ignacio Wert told congress two years ago that the government wanted to "hispanicize" Catalan pupils - comments that caused uproar in the northeastern region. Rajoy recently told reporters that "some people want to take us back to the Middle Ages;" referring immediately afterwards to Sunday's Catalan vote.

Analysts say the government's position has helped boost the independence cause. Critics of the central government says its stance reminds Catalans that the ruling People's Party's political roots lie in Franco's Fascist regime, which repressed non-Spanish speakers such as Catalans. "There is a fundamental block on the Spanish side regarding the Catalan issue, which has not managed to be altogether taken seriously," said Juan Jose Lopez Burniol, a Catalan magistrate and author of books on the subject, in a recent radio interview on national radio SER.

Rafael Vecino lived through the Franco regime, and remembers the sense of freedom that Spaniards had as it ended. Bolstered by the prospect of better economic times, Rafael left his safe public sector job to try his hand at information technology - to the horror of his conservative military family, he recalls. Today, he says that it is right for Catalonia - a wealthy region - to contribute more to parts of the country that have less. Rafael's wife Cesca comes from a traditional Catalan-speaking family, but she - like her husband - does not support independence. But his son Daniel, a married father of two, believes Catalonia has been held back by the rest of the country. Between 2005 and 2013, the number of people below the poverty level has risen to 20 percent, according to European statistics institute Eurostat.