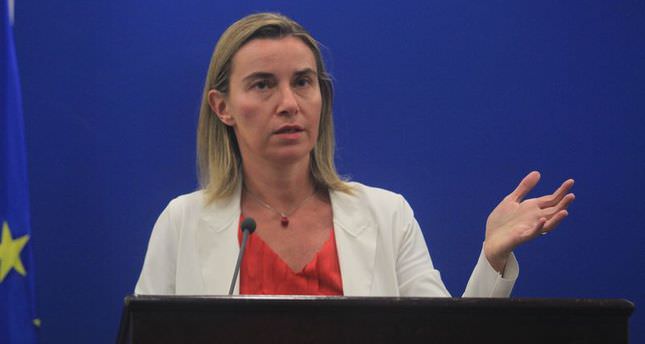 by AA
Nov 10, 2014 12:00 am
EU's foreign policy chief called on Russia to withdraw its troops, weapons and equipment under its control from Ukraine on Monday.

The High Representative of the European Union for Foreign Affairs, Federica Mogherini, also asked Russia to ensure that the pro-Russian separatist rebels obey the September 5 cease-fire agreement with the Ukrainian government signed in Belarus' capital Minsk.

On October 25, NATO Chief Jens Stoltenberg also warned Russia from recognizing the rebel elections held in defiance of the Ukrainian government. "These elections violate Ukrainian laws and run counter to the Minsk agreements co-signed among others by the two self-proclaimed 'republics' and by the Russian Federation."

Fighting continued in Ukraine on Monday with heavy shelling around the eastern Ukrainian city of Donetsk on Sunday.

On November 9, two convoys of 17 trucks each, including artillery and multiple-launch rocket systems were reported entering Ukraine from Russia territory by the the Organization for Security and Co-operation in Europe Special Monitoring Mission to Ukraine.This was the second day in a row that the mission observed convoys in the eastern outskirts and territories of Donetsk city.

The build-up of separatist reinforcements in Ukraine comes around two weeks after Ukrainians elected the most pro-European parliament of its 23-year old history on October 26.

This was followed by pro-Separatist rebel elections in the eastern part of the country on November 2. Both the EU and NATO denounced the rebel poll as illegitimate, and said it undermined efforts to resolve the conflict.

However, Russia did recognize the vote, and separatist leader Alexander Zakharchenko was sworn in as head of the self-declared Donetsk People's Republic.

At least 3,600 people have died and 8,700 people have been wounded between mid April and October 6, the UN Human Rights Office said in a report released on October 8.