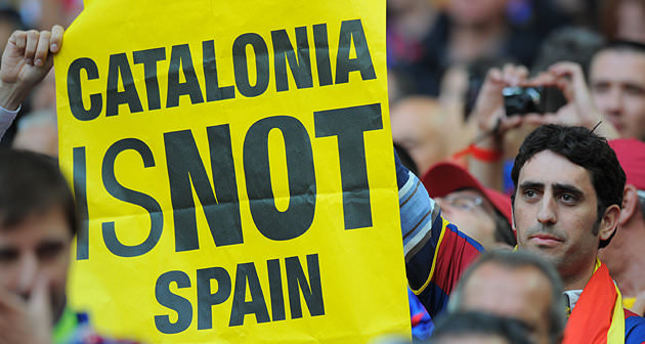 As Catalans backed independence with 80 percent of the vote, its quest for seperation from Spain proves to have major legal implications for both the Spanish central government and the EU

As Catalans voted Sunday in favor of breaking away from Spain to create an independent Catalan state, the legal implications of Catalonia's bid for independence for Catalans, Spaniards and the EU is of crucial importance. The question of independence for Catalonia is on the EU member states agenda as neither Spain nor other EU countries are in favor of Catalonia's independence. The EU's charter does not involve any binding law for this matter, as the break-up of an EU member state is unprecedented. Britain, which dealt with Scotland's bid for independence, put emphasis on the unity of the Spanish government while urging for a legal referendum to be "done through the proper constitutional framework."

"Britain is a friend and a great ally of Spain ... we want Spain to stay united and to stay together," British Prime Minister David Cameron told business leaders at a conference in London, Reuters reported.

Despite low turnout in Sunday's non-binding referendum, 80 percent of Catalans who went to the polls voted for the independence of a Catalonian state. About 1.6 million people voted for independence, according to results released by the Catalan government. "Catalonia has once again, the people of Catalonia, have made it very clear that we want to govern ourselves. It is an old aspiration that dates back centuries and remains perfectly alive," the president of the Catalan government, Artur Mas, said.

Spain, as an EU member state, has denied a possible split of Catalonia from the central government. It is highly believed that Spain's decentralization would cause even greater harm to Spain's already stagnant economy, which is still suffering from a deep economic crisis. Therefore, the Spanish government has been in favor of keeping a wealthy region like Catalonia inside its borders. The central government has repeatedly denied granting Catalonia greater autonomy over the region's financial issues. Catalonia is a highly industrialized and independent-minded region in northeastern Spain. With a population of 7.6 million, it has long enjoyed prosperity with its own language and culture, compared to the Spanish government, which is suffering from economic challenges including high unemployment rates and low average income. The economic crisis has hit Spain hard since 2008 and caused increasing tensions between the central government and Catalonia, leading to a greater surge in support for independence. The Catalan government has blamed the central government for much of Spain's debt crisis.