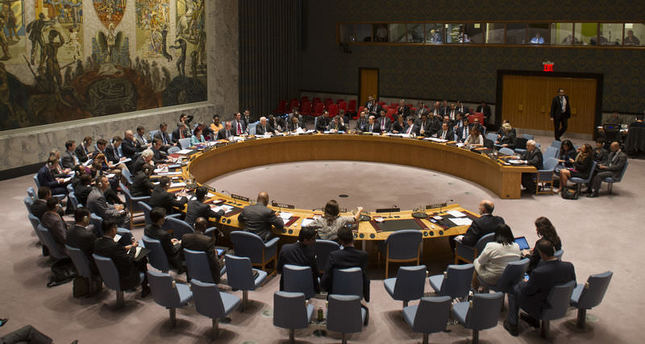 by AA Nov 12, 2014 12:00 am
The UN Security Council will convene an emergency session on Wednesday to address the recent movement of Russian arms in eastern Ukraine, with Kiev and its allies accusing Moscow of escalating tensions.

The announcement came as tensions between the West and Russia continue to worsen following the November 2 pro-separatist self-rule referendum in the eastern part of the country.

The EU and NATO have denounced the poll as illegitimate, and said it undermined efforts to resolve the conflict. Russia recognized the vote, however, and separatist leader Alexander Zakharchenko was sworn-in as head of the self-declared Donetsk People's Republic.

White House National Security Council spokesperson Bernadette Meehan voiced concerns on Sunday about the movement of heavy weapons and tanks as the fight escalated in eastern Ukraine between the Ukrainian forces and pro-Russian separatists.

She said that numerous reports, including from the Special Monitoring Mission of the Organization for Security and Cooperation in Europe, revealed that pro-Russian separatists were moving large convoys of heavy weapons and tanks to the front lines of the conflict.

At least 3,600 people died and 8,700 people were wounded during the conflict between mid-April and October 6, the UN Human Rights Office said in a report last month.

A fragile truce has been observed since September 5, although hundreds have been reportedly killed since the agreement.