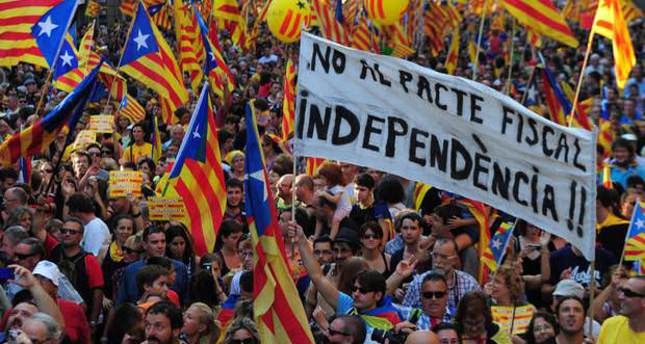 by daily sabah
Nov 13, 2014 12:00 am
The demand for Catalonian independence has been rejected once again by the Spanish central government after Sunday's symbolic independence vote. The central government says such a move is unconstitutional and denied granting self-determination to Catalonia's regional government in a statement released on Tuesday. "The right to self-determination that you demand is not possible, neither under our constitution nor in any of the other democracies around us," Spanish Deputy Prime Minister Soraya Saenz de Santamaria said in the Spanish parliament on Tuesday as reported by AFP. "If what you want is independence for Catalonia, it will be difficult for us to come to an agreement," she added.

Sunday's independence vote was also considered "unofficial" by Spanish authorities, saying that the president of the regional government of Catalonia, Artur Mas, would face charges for organizing a referendum that deteriorates the unity of Spain, DPA reported. Spanish prosecutors decide on Wednesday whether to file charges against Mas as well as several other ministers for holding an illegal vote that the central government rejects.

About 1.6 million people voted for independence on Sunday. Despite a low turnout in Sunday's non-binding referendum, 80 percent of Catalans went to the polls and voted for the independence of Catalonia. Mas said that the non-binding vote will pave the way for a more definitive vote in which Catalans will decide for self-determination in the upcoming regional elections.

The Spanish government has long questioned the legality of Catalonia's independence vote, as a possible break-up would violate the unity of Madrid's authority. The referendum poses a greater challenge for the Spanish state and has been considered unconstitutional due to the fact that the non-binding vote would violate Spain's 1978 constitution that only allows referenda that include all Spaniards. According to the Spanish constitution, Catalonia does not have the legal capacity to hold an independence referendum.

Catalans' votes for self-determination have been blocked several times in Spanish political history. Recalling the latest moves from Madrid, the Spanish parliament voted in April 2014 to reject a request by Catalan authorities for greater autonomy. After a long debate, all major parties voted against the referendum. A total of 299 Spanish parliamentarians voted against the motion and 47 votes in favor. Deputy Mariano Rajoy called the referendum illegal while saying that Madrid would not give permission to Catalonia to hold a referendum.

Catalonia, a highly industrialized region in the northeast of Spain with a population of 7.6 million, has long enjoyed high prosperity and well-being. Pro-independence sentiments have grown over the economic recession that the central government has long been suffering through. Catalans favor greater autonomy over the region's financial issues as they reject turning tax revenues over to the central government under the current fiscal system.