Worsening situation in Ukraine prompts fears of a renewed war 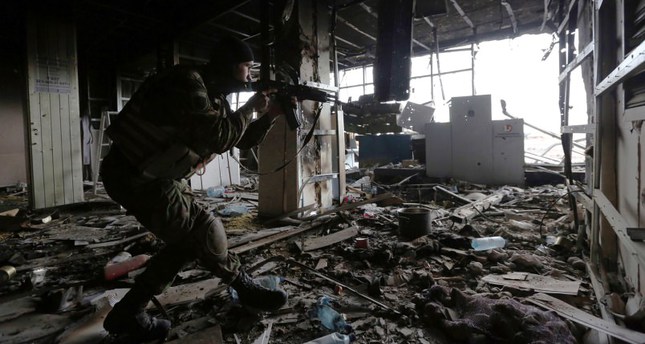 As the Russian military heavily engages in the crisis in eastern Ukraine, fears mount over the conflict in the region as NATO and the West put pressure on Russia to withdraw its combat forces

Tension in the embattled eastern Ukraine significantly increased after the arrival of columns of Russian military reinforcements in the east of the country paved the way for a return to all-out conflict in the region while completely deteriorating the relations between the West and Russia.

Since the fighting erupted between Ukrainian forces and pro-Russian rebels, no agreement on a permanent solution has arrived to resolve the Ukraine crisis. The mediating efforts between the European Union, Ukraine and Russia have resulted in no significant improvement so far to end the pro-Russian separatist rebellion in eastern Ukraine. The fragile cease-fire agreement between rebel pro-Russian separatists and Ukrainian forces have apparently not been successful in halting the months-long conflict with many outbreaks of violence being reported and the death toll passing 4,000 since the peace truce was signed on September 5. The Minsk accords of September 5, which aimed to reach peace in Ukraine's east, has already reportedly been broken many times by the continuing heavy exchanges of artillery shelling in and around Donetsk Oblast.

"With the Minsk agreements in question, and uncertainty over how much strain the cease-fire can withstand, we are deeply concerned over the possibility of a return to full-scale fighting," he added, while warning of further strained relations with Russia.

Russia's increased militarization of the rebel-held areas in the Donbass region, and its explicit support for pro-Russian separatists seeking a regional leadership close to Russia, was criticized by NATO warning that a full-scale war is at the border of Ukraine. The Russian Defense Ministry rejected NATO's claim concerning Russian militarization in eastern Ukraine, saying that, "We have stressed many times that the regular hot air from Brussels is not backed by facts," Russian defense ministry spokesman Igor Konashenkov said in Moscow, accusing NATO of "increasing anti-Russian sentiments," according to DPA.

As part of the growing international pressure on Russia to stay away from the conflict in eastern Ukraine, U.S. Ambassador to the U.N. Samantha Power said Russia "keeps fueling war" while holding a peace rhetoric to address the crisis.

As more Russian troops have reportedly entered Ukraine, moves which violate the country's territorial integrity, the Ukraine government has prepared for a possible war with Russia. In response to Russia's continued military build-up in the rebel-held areas Ukraine has been preparing its armed forces to fight against Russian-backed rebel troops amassed in the east of the country. "I do not want the world to suffer from color blindness, the red line has been crossed not dozens, but hundreds of times," Ukraine Prime Minister Arseniy Yatsenuk said in a cabinet meeting in Kiev, as reported by DPA news agency.

Following the volatile peace agreement that has reportedly been broken many times, the pro-Russian separatists' independence vote on November 9 led to a further increase in the conflict that has come to its worst point in months. Pro-Russian separatists seeking a regional leadership close to Russia cast their votes in an election that Kiev and the West refused to recognize. The West and Ukraine consider the move as undermining the already broken peace process in the war-torn east while leading to further tension with Russia.

Pro-Russian rebels' determination for self-rule in the regions of Donetsk and Lugansk was denounced by the EU and NATO as illegitimate while Russia recognized the vote. Since the separatists' vote, tension between Russian and the West has been further strained, leading to a point of no-return over the Ukraine crisis.

Since the fighting erupted in the eastern districts of the country, the conflict has claimed more than 4,000 lives and driven hundreds of thousands of people from their homes. The ongoing armed conflict has left many people in worsening humanitarian conditions as some armed groups continue to terrorize civilians' lives in areas where the conflict has been continuing.