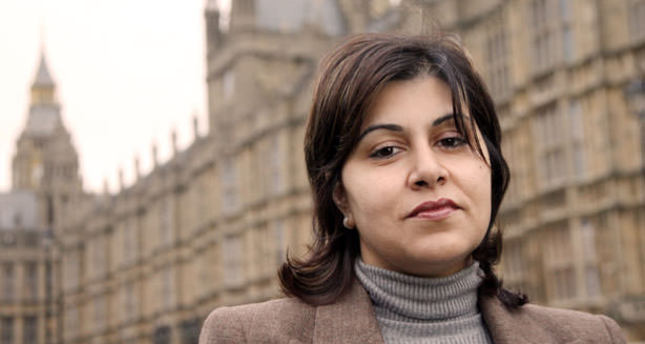 by AA
Nov 15, 2014 12:00 am
Britain's first female Muslim cabinet minister who quit last August over the crisis in Gaza has spoken out over her resignation, the Israel-Palestine conflict, the U.K.'s European reform plans and the current turmoil in the Middle East. Sayeeda Warsi, who was in Turkey on her first overseas visit after her high-profile resignation, spoke to students at Istanbul's Şehir University on Thursday. A lawyer by training, the Conservative Party politician first became a cabinet minister in 2010 and was later appointed as the U.K.'s Senior Minister of State at the Foreign Office.

However, Warsi told Anadolu Agency that Prime Minister David Cameron's refusal to condemn the attacks on Gaza by Israel during the recent conflict was the main reason for her resignation. "In politics, there are many policies you come across and sometimes you may not entirely agree with [them]," Warsi said. She said she was no longer able to support her government's policy over the escalation of violence in the Israel-Gaza conflict, adding that it meant she had to "go it alone."

Speaking to the British daily The Independent in August, Warsi was quoted as saying: "I worry about being on the wrong side of history," adding, "There are some decisions which are so wrong that you know in your heart." Warsi told Anadolu Agency: "I believe that the Western policy on the Middle East peace process, by not recognizing Palestine, by not having consequences for the [Israeli] settlements and buildings in the West Bank, by not allowing the Palestinians to go to international courts for issues like getting justice, is really wrong." "These are all issues which will, over time, show that Western policy is on the wrong side of history and I did not want to be on the wrong side of history," she added.

Asked if Western countries still accused Turkey of tacitly cooperating with Islamic State of Iraq and al-Sham (ISIS) militants, Warsi said, "I do not think placing the responsibility on Turkey is the only solution." "This is not going to resolve the matter, but what is going to resolve the matter is an international effort," she said. Explaining that fighting ISIS is going to require an effort "especially by the United States, which has been a part of what happened in Iraq", Warsi said: "It also requires more than just military aid. It is going to require a response on so many different levels." "ISIS is a problem for all of us," she added.

Evaluating her Conservative Party's plans for a referendum in 2017 if it wins an outright majority in the U.K.'s 2015 general elections, Warsi said she backed the party's reform plans as "the EU is not fit for purpose." "When the U.K. joined the EU it was actually an economic community. However, we believe in many ways the EU does not actually support freedom of trade anymore," she added. Although Cameron has vowed to offer a referendum on Britain's membership in the EU, several member countries have reacted against the plan.

European Commission President José Manuel Barroso has warned that the U.K. would be making a "historic mistake" if it decided to leave the EU. Accusing the EU of being a structure of bureaucracy, Warsi said, "The bureaucracy that the EU operates is making it more difficult for jobs to be created and for the economy to be grown." "We are not saying we won't be part of the EU, but we want to be a part of a better EU," she said. Wardi said that she met President Recep Tayyip Erdoğan and when she arrived in Ankara on Wednesday: "What I can say is Turkey has a bright future with Erdoğan." Indicating that Erdoğan had been very supportive after her resignation, Warsi said, "It was really a difficult time for me."

She also said she was planning to visit Gaza and the West Bank for the first time after her resignation, but had been delayed over security issues. "I hope I will visit Gaza in December, before the end of the year," she said.