Romanians head to polls for the second round of presidential race 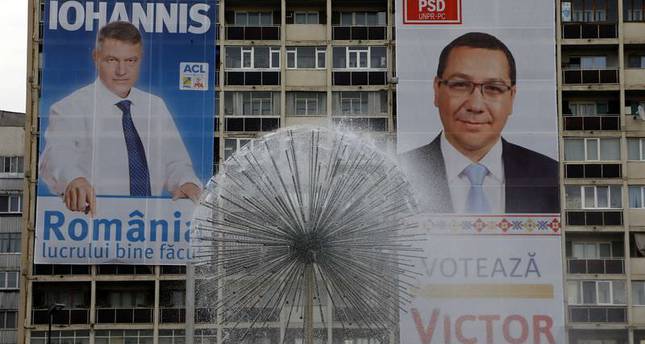 by French Press Agency - AFP
Nov 16, 2014 12:00 am
Romanians voted on Sunday to choose their next president, with current Prime Minister Victor Ponta the overwhelming favorite to win.

The 42-year-old social democrat goes into the second round of voting with 54 percent support, according to the latest opinion polls, clearly ahead of his conservative opponent, Klaus Iohannis.

Everything seems to be in the former lawyer's favor to ensure victory in one of the European Union's poorest countries. Ponta has the political experience, the support of the hugely influential Romanian Orthodox Church and a boost from the strengthening economy.

"I voted so that our parents can live in a better country and our children have a future here in Romania," Ponta said as he voted with his wife and two children in tow.

For his part Iohannis, 55, from Romania's ethnic German minority, seems uncomfortable in front of the cameras, and has faced accusations he is a not a "real Romanian".

Casting his ballot, he said he hoped Romania would "enjoy respect and prosperity."

The polls will close at 19 GMT and first results are expected overnight Sunday.

In the first round of voting on November 2, Ponta finished first with 40 percent of the vote, while his conservative rival took 30 percent.

But one thing could dash Ponta's chances of clinching the presidency, experts claim: turnout.

"The key of the second round is getting out the vote," said Christian Ghinea of the Romanian Centre for European Politics.

"If the voters in the big cities, who tend to favour the opposition, are mobilised, Iohannis has a chance," Ghinea told AFP.

Turnout was 52 percent in the first round.

Another great unknown is the vote of the diaspora, which numbers about three million.

Only 160,000 were able to cast their ballots in the first round, however, due to an insufficient number of polling stations in countries including France, Germany and Britain.

But of those, 46 percent voted for Iohannis and 15.8 percent for Ponta -- suggesting the vote of those abroad could be a major factor going into the runoff.

On Sunday, hundreds of people queued before dawn outside polling stations in Paris, London and the Italian city of Turin, according to pictures shown by Romanian television.

The vote is seen as pivotal for the former communist country at a time when democracy has suffered setbacks in some neighboring states such as Hungary, and as the Ukraine crisis has shaken relations between the EU and Russia.

The election campaign has been marred by scandal, with numerous corruption probes including some aimed at allies of the prime minister, and a settling of scores between Ponta and his long-standing rival President Traian Basescu.

The popular centre-right Basescu, who has accused Ponta of being a former spy, cannot run for a third term. He and Ponta have shared two stormy years at the top of Romanian politics.

Whoever takes over the presidency will face pressing issues including recession and persistent accusations of corruption and bad governance.

If Ponta wins it will concentrate powers in the hands of the Social Democrats, which is also the largest party in parliament.

Iohannis has in turn promised to strengthen the rule of law and to attract more foreign capital to Romania.

Romania's head of state is responsible for foreign policy and top-level appointments such as prosecutors in the second poorest EU country after Bulgaria.