EU mulls new sanctions on rebels in Ukraine instead of Russia 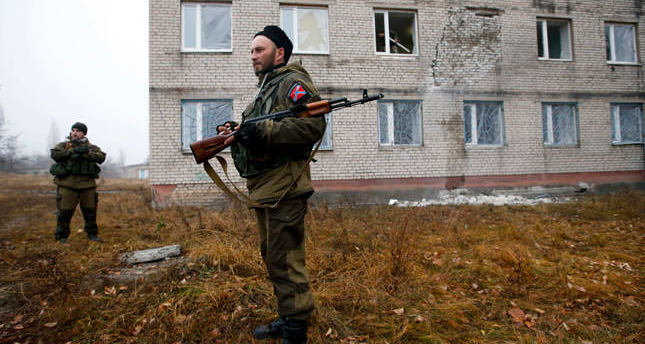 After leaving Russia isolated during tense meetings at the G20 summit over the crisis in Ukraine, EU leaders met yesterday to discuss more sanctions targeting Russia and pro-Russian rebel groups operating in eastern Ukraine. However, the EU foreign ministers' fresh sanctions would likely only hit Russian-backed separatists rather than Russia itself. Sanctions on Russia will be discussed at the next summit in December, the EU officials said, Reuters reported. Whether or not the new sanctions will prove to be a deterrent for separatists to continue the months-long crisis remains unknown, however. The EU foreign policy chief, Federica Mogherini, spoke before the meeting was held, saying "Today we will discuss what the best option will be to react to the so-called elections on November 2."

"We all said the elections were illegal and illegitimate and might require some reaction from the European Union's side," she added. The EU leaders' move came after German Chancellor Angela Merkel's statement last week over possible tightened sanctions, and indicated that "further economic sanctions are not planned at the moment."

The new sanctions include "adding names of Russian-backed separatists to the list of people banned from entering the European Union and those whose EU assets are frozen." The pro-Russian separatists' independence vote on November 9 led to a further increase in the conflict that is at its worst in months. Pro-Russian separatists, who want a regional government close to Russia, cast their votes in an election that Kiev and the West refused to recognize. Since the separatists' vote, tension between Russian and the West has been further strained, leading to a point of no return over the Ukraine crisis.

As the EU prepares to impose more sanctions on separatists armed by Russia, Russian President Vladimir Putin accused Western countries of forgetting their job to act as a mediator between the rebels and the Kiev government, the state-run Russian news agency Itar-Tass reported on Monday. As the reported violence clearly shows that the pact with Ukraine has already been broken, the mediating efforts of the EU have resulted in no significant improvement so far to end the pro-Russian separatist rebellion in eastern Ukraine.

Russian's assertive policies in the Ukraine crisis, by amassing its troops on Ukraine's border and backing and financing rebels in eastern Ukraine, has led to increased tensions that have deteriorated the bilateral relations between the West and Moscow since hostilities erupted in April. The Russian annexation of Crimea in late March and increasing signs of its involvement in eastern Ukraine have prompted fears among Western countries. Since the unrest prevails in Ukraine, EU leaders have threatened Russia by imposing sanctions in order to stop Russian aggression over Ukrainian territory.

European leaders discussed new EU sanctions on Russia in June while introducing a new set of six restrictive measures including suspension of financing operations and restricting investments in Crimea in line with the policy of non-recognition of the illegal Russian annexation of Crimea and Sevastopol. In addition to imposing travel bans and freezing assets on specific Russian businesses, individuals and organizations in Putin's inner circle, European leaders, with "Tier 3" sanctions, aim to block Russian access to European markets for whole sectors of the Russian economy. The hard-hitting sanctions, which aim to hit the Russian gas and oil sector and to impose an arms embargo on Russia, have long been on the EU agenda.

Since the fighting erupted in the east of the country, the conflict has claimed more than 4,000 lives and driven hundreds of thousands of people from their homes. The ongoing armed conflict has left many people in worsening humanitarian conditions as well.

Meanwhile, loud explosions and artillery fire rocked Donetsk airport in eastern Ukraine on Monday, despite attempts to negotiate an end to a battle that is undermining a ceasefire in regions held by separatists. A Reuters reporter near the strategically important airport saw flashes of artillery fire in several places and heard frequent blasts in new clashes between the pro-Russian rebels and government forces despite the truce agreed on September 5. A separatist leader, Andrei Purgin, said on Sunday the rebels had reached an agreement with the Ukrainian forces to stop shelling around Donetsk airport, which both Ukrainian and rebel forces lay partial claim to. But a military spokesman in Kiev said the agreement was meant only to allow the rebels to recover the dead and wounded from the airport and that fighting had abated overnight. "Now, I understand, they have sorted out the corpses and have started shooting again," said the spokesman, Vladyslav Seleznyov.