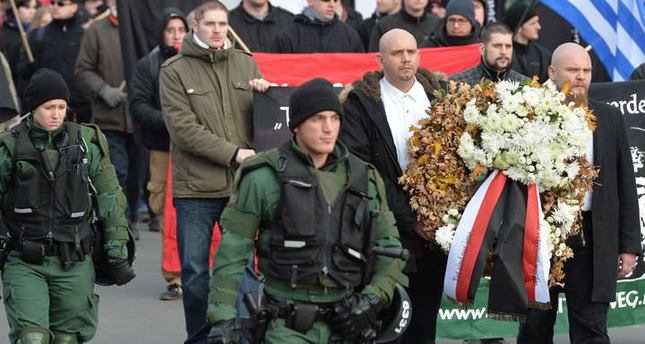 Neo-Nazis marching through a German town have unwittingly raised thousands of euros for a tolerance project, organisers of the anti-extremist protest action said Monday.

Local businesses and residents agreed to donate 10 euros ($12.50) for every metre (yard) walked in the far-right rally on Saturday through the town of Wunsiedel in Bavaria.

The 10,000 euros collected will go to EXIT-Germany, a charity helping neo-Nazis turn their backs on the scene.

Organisers hung humorous posters along the route and even painted a finish line at the end of the march with a sign "thanking" the 250 participants for their "donation".

A video posted by EXIT on YouTube indicated that the neo-Nazis only learned of the fundraiser when they crossed the finish line.

Far-right extremists have marched through Wunsiedel every year for more than two decades on Germany's National Day of Mourning, which is dedicated to all victims of "war and tyranny".

The neo-Nazis chose the town because Hitler's deputy Rudolf Hess, who was found hanged in a West Berlin prison in 1987, was buried in Wunsiedel before his remains were exhumed in July 2011 and the grave destroyed.

But even the destruction of the site has not stopped the far-right from congregating, although authorities say their rallies have grown smaller.

Shopkeepers had long chosen silent forms of protest and legal action to fight the marches but the fundraiser's co-organiser Fabian Wichmann said this year the town decided to take a more creative approach.

"We want to show what else you can do, what other courses of action you have," he told German news agency DPA.

"You can do more than just block the street or close the shutters."

Also on Saturday, a rally by around 3,000 right-wing extremist football hooligans against in the northern city of Hanover drew two protests of leftist and anti-fascist demonstrators of about 4,000 people.