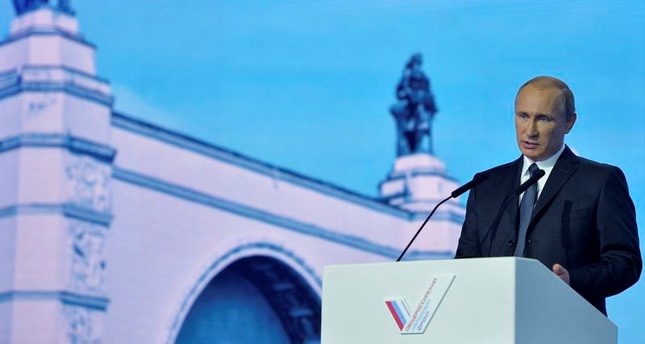 by Nov 18, 2014 12:00 am
The United States wants to subdue Moscow, but will never succeed, Russian President Vladimir Putin said on Tuesday.

"They do not want to humiliate us, they want to subdue us, solve their problems at our expense," Putin said at the end of a four-hour meeting with his core support group, the People's Front.

"No one in history ever managed to achieve this with Russia, and no one ever will," he said, triggering a wave of applause.

Putin's tough talk reflected the strain in ties between Moscow and Washington, who are at loggerheads over the crisis in Ukraine, where the West has accused Russia of promoting and arming a separatist rebellion.

During the meeting, Putin repeatedly urged Russian firms, including in the agricultural and defense sectors, to boost their sales on domestic markets following tit-for-tat sanctions with West triggered by the row over Ukraine.

Putin fielded a range of questions during the event, on everything from the sales of blood glucose meters to housing problems, with the Russian leader stressing his determination to improve the economy which is straining under the sanctions.