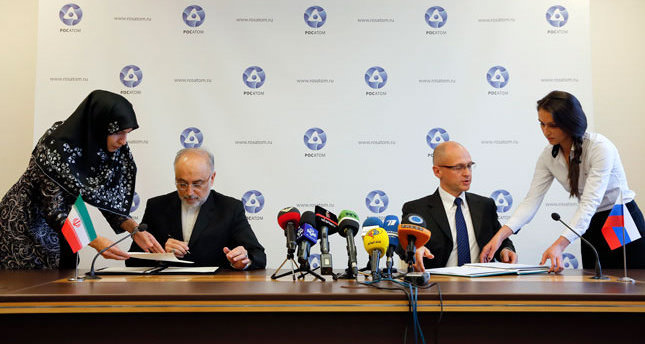 Russia made a challenging move by signing a deal with Tehran to build more nuclear reactors in Iran. The deal strengthens nuclear cooperation between the two countries and gives mixed signals to the West

On the anniversary of the interim deal signed by the P5+1 (the U.S., U.K., France, Russia, China and Germany) and Iran, these six world powers and Iran are once again preparing to meet in Vienna for make or break talks on Nov. 24. As the talks near their deadline, Russia has agreed to build at least two new nuclear reactors in Iran only days ahead of the critical nuclear talks, raising questions in the West. Russian officials said the deal will help make Iran's nuclear activities more transparent, but the details of the arrangement between the two countries were not made clear.

Even though Ali Akbar Salehi, the head of the Atomic Energy Organization of Iran, said the timing of deal was "merely coincidental," it makes Russia more powerful among P5+1 countries.

On the subject, speaking to Daily Sabah, Sir Andrew Wood, former U.K. ambassador to Russia, said, "Russia is not interested in nuclear weapons, Russia is offering, as I understand it, to take the lower enriched uranium from Iran to make it into fuel rods, and to compensate for that by building new nuclear power stations. Russia has an interest in Iran not developing nuclear weapons, not least because of the wider consequences of such an outcome. If Iran acquired nuclear weapons, then other states in the region would develop them too, which would add to the present instability in the area. Moscow may perhaps suppose that this may happen anyway. But the Kremlin is not entirely predictable, and Russia also has an interest in nurturing a cooperative relationship with Tehran as well as a fraught relationship with the West and Washington in particular. So the details of an arrangement on the lines suggested need to be worked through along with guarantees as to how they would be enforced. Trust is essential here."

Last week President Hassan Rouhani of Iran said that Iran has compromised enough to reach an agreement. "Iran has made its utmost efforts and made the necessary adjustments to its demands and we hope that all the P5+1 countries, particularly the U.S., which occasionally seeks excessive demands in the nuclear talks, will understand the circumstances," Rouhani said.

Wood said Rouhani's statements may be a good sign. "When someone says that they have compromised enough, it is as often as not a sign that they realize that a decision point is not far off, and that they, as well as the other parties to the negotiation, need to make further unwelcome moves to reach an agreement. In that sense what Rouhani said may be a good sign. We should all hope so. The agreed aim of the negotiations is clear enough, however much the details can be made complex and disputable, and however much questioning there may be within the Iranian and other parties to the negotiations. Trust is not easily secured, and trust is of the essence."

Dr. Patricia Lewis, the research director of international security at Chatham House, said in a conference that Iran actually took some positive steps to build trust. "The IAEA [International Atomic Energy Agency] reported at the beginning of November that a number of things have happened that have improved the situation. They say that Iran no longer has a stock of 20 percent enriched uranium hexafluoride [the gaseous form]. It's all been changed into the solid form. That's a very big step. As a confidence-building measure, that's significant. And it's continued to decrease the gaseous form of 5 percent enriched uranium, into solid form. So that's a continuation," Lewis said.

Lewis said that even though there are some improvements, Iran has not yet proposed the new practical measures that it was supposed to do by the beginning of September, in terms of the next step in relation to the framework for cooperation. She said that there were some really good and important improvements but some were not so good, which indicated that the negotiations still have ground to cover.