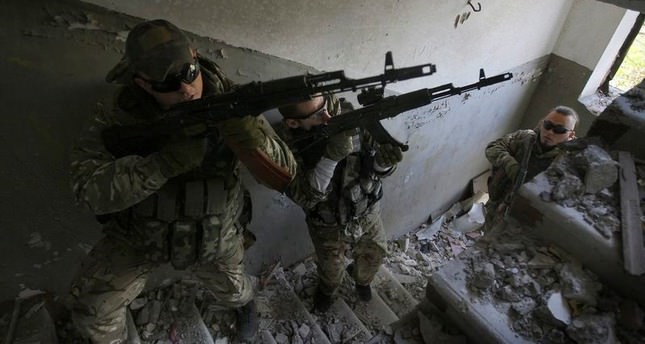 by French Press Agency - AFP
Nov 20, 2014 12:00 am
Almost 1,000 people have been killed in Ukraine since a truce came into effect in September, an average of 13 people a day, the United Nations said Thursday, as the conflict in the east drags on.

Meanwhile, US Vice President Joe Biden arrived in Kiev ahead of Friday's anniversary of the start of the Maidan protests against the former pro-Kremlin regime which eventually sparked the conflict in the east.

Prime Minister Arseniy Yatsenyuk said he hoped for an announcement on further US assistance to Ukraine during Biden's visit following a $53 million (42 million euro) package announced in September which included $46 million of security assistance.

But Russia warned against the US arming Ukrainian forces, with the secretary of Russia's national security council, Nikolai Patrushev, saying the conflict in eastern Ukraine "will grow" if this happened.

The Kremlin denies Western and Ukrainian accusations that it is backing the separatist rebels with troops and military equipment but diplomatic relations have plunged to a low not seen since the Cold War over the seven-month conflict.

International monitors from the Organization for Security and Cooperation in Europe (OSCE) mission in the former Soviet state said Thursday one of their teams had been shot at by a man in uniform.

The incident highlights continuing high tensions in eastern Ukraine, where government forces and pro-Russian rebels are fighting a drawn-out battle for territory.

The UN Human Rights Monitoring Mission in Ukraine put the number of dead at 957 from September 5, when the ceasefire was signed, to November 18.

"The list of victims keeps growing. Civilians, including women, children, minorities and a range of vulnerable individuals and groups continue to suffer the consequences of the political stalemate in Ukraine," UN High Commissioner for Human Rights Zeid Ra'ad Al Hussein said in a statement.

Counting the 298 people who died in the downing of Malaysia Airlines flight MH17 over Ukraine in July, the overall toll since mid-April, when fighting started, stood at 4,317 deaths as of Tuesday.

One Ukrainian soldier said his right arm, bearing a "Glory to Ukraine" tattoo, had been chopped off with an axe by rebels.

A separatist detained by Ukrainian forces in Donetsk said he had been suffocated with a plastic bag and repeatedly beaten.

It also highlighted the huge volume of people registered as displaced within Ukraine by the conflict, with the number soaring from 275,489 in mid-September to 466,829 as of Wednesday.

Giving details of the shooting incident, the OSCE said a uniformed man on the back of a truck fired two shots towards their vehicles near the government-held town of Mariinka, west of the rebel stronghold of Donetsk, on Wednesday.

"The bullets struck about two metres from the second OSCE vehicle," the statement added.

The OSCE said it was the first "direct" shot deliberately fired at observers during the mission.

The incident followed another Tuesday when a warning shot was fired towards an OSCE vehicle from a Ukrainian checkpoint near the frontline hotspot of Debaltseve.

The OSCE has nearly 300 observers working in Ukraine to monitor the ceasefire which has stopped fighting around much of the conflict zone but failed to halt bombardments at strategic flashpoints.

A 58-year-old female nurse was killed in shelling close to the rebel-stronghold of Lugansk, the region's pro-Kiev governor said, while rebels said one of their fighters was killed in Donetsk in the past day.

Biden, the latest high-profile Western politician to visit Kiev in the hope of shoring up the ceasefire, is due to meet President Petro Poroshenko and Yatsenyuk on Friday.

In September, the US announced a fresh $53 million aid package, including non-lethal military equipment, to Ukraine but Kiev wants Washington to go further and provide lethal assistance.

"Blankets and night-vision goggles are important," Poroshenko told Congress on a visit to the US in September. "But one cannot win a war with blankets."