Strikes and protest calls made in Italy 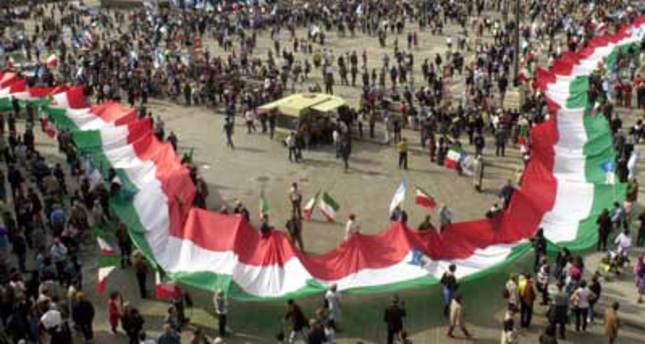 by reuters
Nov 21, 2014 12:00 am
Italy's social fabric is fraying. People worn down by years of economic stagnation and austerity are suddenly giving vent to their frustrations with a spate of strikes and spontaneous protests which have taken politicians by surprise. Scarcely a day goes by without Italy's main cities being disrupted by workers, students or angry citizens' groups. Centre-left Prime Minister Matteo Renzi has been wrong-footed by the souring mood and his approval ratings are falling. The CIGL and UIL union confederations on Wednesday called a nationwide strike against Renzi's policies for Dec. 12. The third big confederation, the CISL, will join them in a separate strike for public sector workers on a date to be announced. The strikes promise to be the largest show of union muscle since 2011, when Mario Monti pushed through tough austerity measures to try to drag the country out of a debt crisis.

Yet there is something deeper going on: a mood of public anger which is often not channeled through unions that mainly represent pensioners and a shrinking pool of workers on regular contracts in large companies. In Tor Sapienza, a poor neighborhood on the outskirts of Rome, the residents have been protesting for days against a local center for immigrants, throwing rocks and setting bins alight. "We are surrounded. There are the prostitutes over there, the gypsies down there, here the immigrants. It's just too much," said pensioner Milena Pecci.

Most locals claim they are not racist, just exasperated by rising crime, squalor and lack of basic services like street lighting. Visiting politicians of all colors, including the center-left mayor, have been greeted with boos and derision. "After the candy they are offering us now, since we are under the spotlight, everything will go back like before and the politicians will keep thinking just about their pockets," said 38-year-old widow Francesca Ribaudo.

Italian economic output has shrunk by 9 percent since 2008 with youth unemployment reaching 43 percent and more than 80,000 businesses lost in the course of three recessions. And while other countries hit by the euro zone debt crisis, such as Ireland, Spain and even Greece are showing signs of recovery, Italy's economy is again contracting. "People's patience has finally run out. I expected this to happen but I didn't expect it to happen so soon," said Luca Ricolfi, sociology professor at Turin University and one of Italy's foremost political commentators. The three union confederations, which together have more than 8 million members, are angered by public pay freezes and Renzi's plans to ease firing restrictions for large companies. Renzi says his Jobs Act, which comes two years after a labour shake-up under Monti, will simplify the rules and help attract investment. Yet most economists say the changes proposed are marginal. Michele Tiraboschi, Professor of Labour law at Modena University said the Jobs Act was "nebulous," and contained "very little of substance". Precisely for this reason, it did not justify the mounting popular revolt.

Anger among the unemployed, the young and people living in deprived areas -- who Ricolfi calls the "outsiders" -- is taking the form of "do-it-yourself" protests among people who had previously been desperate but apathetic. It is targeted at politicians of all stripes and has seen a surge in support for the anti-immigrant Northern League party. Corcolle, another eastern suburb of Rome, was the scene in September of similar violence to Tor Sapienza, and in Milan this week left wing students and squatters have clashed with police. Citizens in Genoa and other cities hit by floods in recent weeks have also protested about a lack of government help. The 39-year-old Renzi, renowned for presenting an image of optimism, has been criticized for not visiting flood victims. Renzi's Democratic Party (PD) remains by far Italy's largest, helped by the weakness of the divided center-right. But according to the Demos agency, Renzi's personal approval rating fell 10 points between October and November, to 52 percent.

Ricolfi says Italians used to clear political divisions are disoriented by Renzi, who is often more popular among conservative voters than left-wingers, contributing to the unstructured stream of protests. "Nobody knows if this is a left-wing government or a right-wing government and this creates enormous confusion and uncertainty," Ricolfi said. Centre-right leader Silvio Berlusconi, reviled on the left, publicly supports many of Renzi's policies, and while they are resented by large sections of the PD.