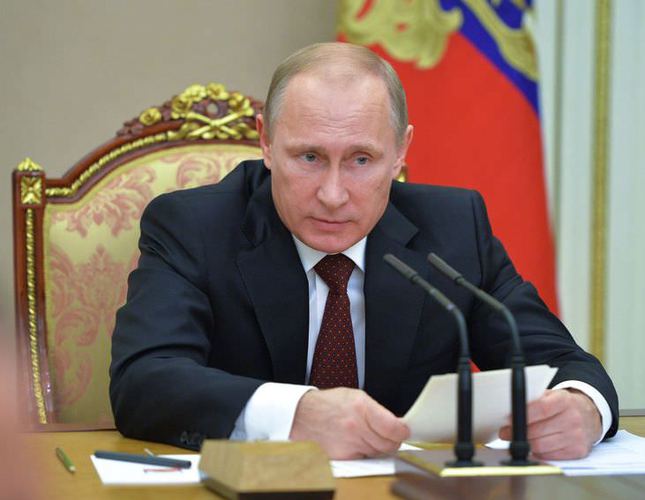 by reuters
Nov 23, 2014 12:00 am
Russian President Vladimir Putin blamed the West for worsening relations with Russia since the Ukraine crisis and said Moscow would not allow itself to become internationally isolated behind another 'Iron Curtain'.

In an interview published by state news agency TASS on Sunday, Putin also said Western sanctions against Moscow, combined with the slide in the roble and oil price falls would have no "catastrophic consequences" on Russia's economy. The United States and the European Union have imposed sanctions on Russia over its annexation of Ukraine's Crimean peninsula and ratcheted them up over Moscow's backing for separatists fighting Kiev troops to split east Ukraine. "We understand the fatality of an 'Iron Curtain' for us," Putin was quoted as saying. "We will not go down this path in any case and no one will build a wall around us. That is impossible!"

Russia's ties with the West are at their worst since the Cold War because of Ukraine, where more than 4,300 people have been killed since violence erupted in the east mid-April. As the West pressures Moscow over Ukraine, Putin accused Washington and Brussels of disregarding Russia's interests. "When Russia starts... safeguarding people and its interests, it immediately becomes bad (in the view of the West), he said. "You think it's over our position over east Ukraine or Crimea? Absolutely not! If it wasn't for that, they would have found a different reason. It has always been like that."

The sanctions hit Russia's weak economy and sparked a slide in the roble, which shed about a third of its value this year. Economic woes are exacerbated by a sharp drop in the global price for oil, one of Russia's main exports. "If the price of energy is lowered on purpose, this also hits those who introduce those limits," Putin said, adding that major producers such as the United States and Saudi Arabia could be in cahoots to lower prices and harm the Russian economy. He said big supply, which he blamed for the price fall, came from the U.S. shale fields, Libya and Saudi Arabia, as well as from Iraq, including what he said were black market sales by Islamic State militants who hold swathes of that country. But he struck a defiant tone on possible consequences for the Russian stagnant economy. "It's far from certain that sanctions, sharp falls in the oil price (and) the depreciation of the national currency will cause negative effects or catastrophic consequences only for us. No such thing will happen!"

Putin also did not rule out running for the presidency again in 2018 when his current term expires, though he denied he wanted to rule until death. He first came to Russia's top job as acting president on the last day of 1999, remaining the country's paramount leader ever since.
Last Update: Nov 23, 2014 11:40 pm