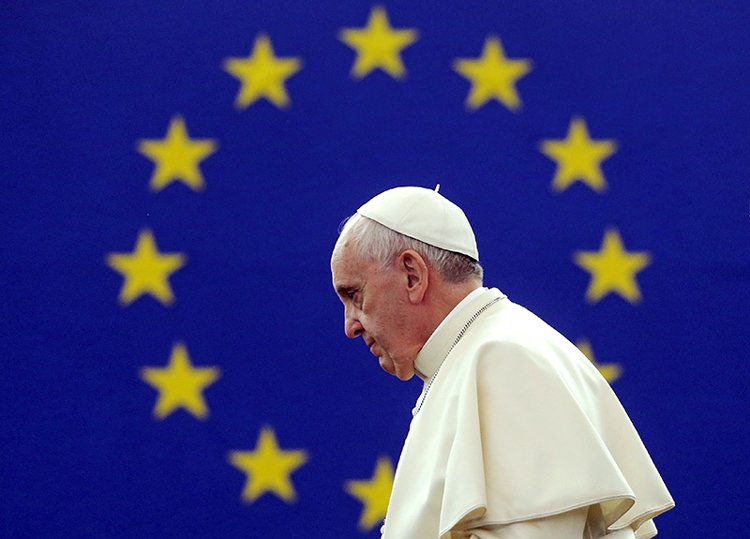 People perceive Europe as having lost its vibrancy and influence in the world, Pope Francis warns during a speech to the European Parliament, calling for policies focused more on people than "technicalities."

"Despite a larger and stronger union, Europe gives the impression of being aged and weary, feeling less and less a protagonist in a world which frequently looks on it with aloofness, with mistrust and even, at times, with suspicion," Francis says.

"We gain a general impression of weariness, of aging, of a Europe as 'grandmother,' no longer fertile and lively," he adds. "The great ideas which once inspired Europe seem to have lost their power of attraction and been replaced by the bureaucratic technicalities of Europe's institutions."

He warns of the risk of people becoming "a mere cog in a machine," with "technical and economic questions dominating political debate, to the detriment of any genuine concern for human beings.

Pope Francis addressed the European Parliament on Tuesday, as part of a four-hour official visit to Strasbourg.

The last visit by a sovereign pontiff to the European Parliament was 26 years ago on October 8, 1988, when Pope Jean Paul II delivered an address just one year before the fall of the Berlin Wall.

The Pope will also speak to the Council of Europe before returning to Rome.

The 77-year old pontiff will travel to Turkey on Friday for a three-day visit to lead the Nov. 30th Saint Andrew's Day celebrations.