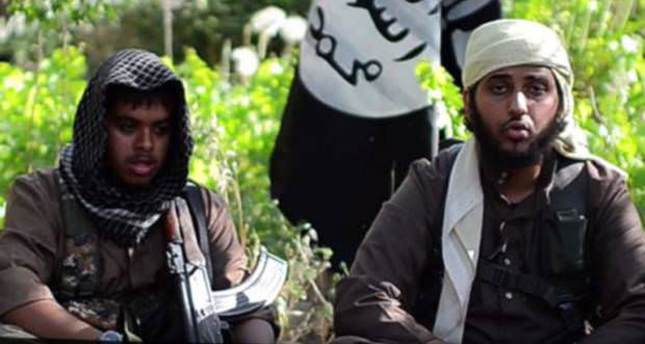 by Büşra Akın Dinçer
Nov 27, 2014 12:00 am
Britain has unveiled its new counterterrorism bill which includes "Temporary Exclusion Orders." Under the new bill the government can block suspected British fighters from returning to the U.K. but is unclear about where they will go. Britain introduced the bill on Wednesday, amid harsh criticism from human rights groups. The draft legislation of the bill includes many controversial measures that may also cause problems for Turkey.

"We are in the middle of a generational struggle against a deadly terrorist ideology," Britain's Interior Minister Theresa May said on Wednesday, adding, "We must do everything possible in line with our shared values to reduce the risks." One of the measures that targets to reduce the risk is blocking suspected British fighters from returning to the U.K. The measure, titled the Temporary Exclusion Order, aims to prevent British citizens suspected of terrorist activity returning to the U.K. for up to two years unless they agree to be subjected to strict monitoring. They will be placed on no-fly lists. It is debated that whether these people will be considered stateless. These people will not become stateless since their citizenships will not be canceled. The international legal definition of a stateless person according to United Nations High Commissioner for Refugees is that "a person who is not considered as a national by any State under the operation of its law.This means that a stateless person is someone who does not have a nationality of any country. Some people are born stateless, while others become stateless over the course of their lives." However, these people will continue to hold their citizenships. Yet, the bill does not clarift what will happen to them.

British people disallowed from returning back to their country may enter Turkey which is currently used as a transit country for foreign fighters wishing to join the fight in Syria or Iraq. According to lawmakers, this situation may create serious problems for Turkey. U.K. Independent Reviewer of Terrorism Legislation David Anderson QC, appointed by the government, called the measure "an announcement waiting for a policy," and he said that exclusion orders cannot be used without the cooperation of the states where these people may be forced to flee.

Mr. Anderson also emphasized that the measure could be more sensible if "one could look at it in terms of young, possibly vulnerable people caught up with the wrong crowd in Syria – [who] didn't really know exactly what they were doing." "Do you want to throw the book at them straight away in terms of arrest and charge? Or is there something to be said, even though you do suspect them of having fought, of keeping them under a very light regime where they might have to report daily to a police station?" he added.

Until today, according to numbers released by the British Government, 500 Britons are estimated to have traveled abroad to join groups fighting in Syria and 218 of those have returned to the U.K.