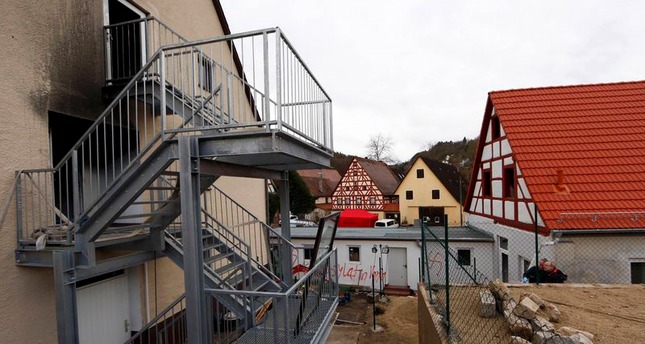 by AA Dec 12, 2014 12:00 am
The German government has condemned a "xenophobic" attack on three buildings housing refugees in the southeastern German town of Vorra, which burned down in what police suspect was an arson attack by neo-Nazis.

Fire tore through the buildings sited in different parts of the town, 50 kilometers (32 miles) northeast of the city of Nuremberg, which had been recently renovated to house asylum seekers.

Chancellor Angela Merkel's Deputy spokeswoman Christiane Wirtz said at a regular press conference in Berlin on Friday: "The perpetrators will be heavily punished.

"There is no place in Germany for right-wing extremism and xenophobia."

Germany has witnessed a rise in anti-asylum seeker and anti-immigration sentiments in recent months, raising worries among politicians.

Joachim Herrmann, Interior Minister of the state of Bavaria, told public radio BR on Friday that "it was obviously an arson attack."

"The swastikas on the wall lead to the suspicion that this might be related with right-wing extremist perpetrators," he said.

Recently formed right-wing and anti-Islam platforms like PEDISA and HOGESA have gathered thousands in protests organized in cities Dresden, Hannover and Cologne.

According to a report by the German Federal Police Office, or BKA, there have been at least 86 attacks on refugee houses this year up to September, greater than the total number of attacks in 2012 and 2013.

A total of 18.2 percent of Germans support the prohibition of immigration of Muslims to Germany, according to a study by the German think-tank Friedrich Ebert Foundation conducted among 1,915 people aged between 16 and 95 between June and September.

A total of 35,729 Syrians have applied for asylum in Germany in the past 11 months.

Majority of the asylum seekers and their families are accommodated in refugee centers or public houses managed by the municipalities and communities.