Ukraine calls for resolution of crisis amid fading hopes 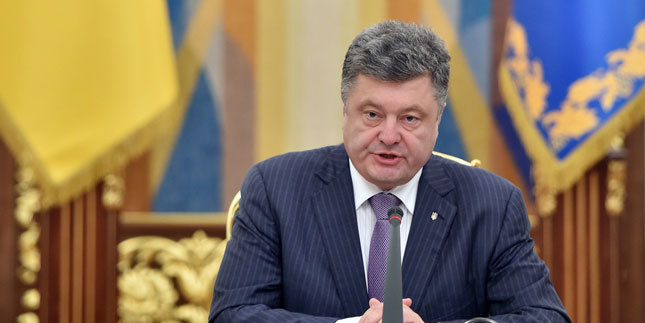 by Daily Sabah Dec 12, 2014 12:00 am
After a series of unfruitful peace talks, the Ukrainian President is looking for tentative steps toward a resolution of the crisis prevailing in the embattled east of the country. Russia is still keeping up its support for separatists in eastern Ukraine.

The Moscow-influenced separatist conflict in eastern Ukraine has yet to be settled despite attempts to put an end to the violent clashes between Ukrainian government forces and Russian-backed separatists. However, no peaceful and permanent resolution has been agreed so far, as the situation in the east of the country worsens. Ukrainian President Petro Poroshenko urged Russia to halt its backing of the rebels, while pleading for the removal of troops from the Ukrainian borders.

"Please stop the fire. Please release the hostages. Please withdraw your troops from my territory. Please close the border," Poroshenko said during a press conference in Melbourne, Associated Press reported. "And I promise if you close the border, within one, two, three weeks, we will have peace and stability in Ukraine. Very simple," he added.

While the Ukrainian President drew attention to the severity of the situation in the rebel-held areas, Russian President Vladimir Putin has tried to improve relations with Asian countries in order to gain support against Western sanctions imposed on Russia over the annexation of Crimea in February. Moscow continues its support for the separatists through financial backing.

Since the crisis began in Ukraine, truce talks have not produced a breakthrough. The peace resolution that was agreed under the Minsk protocol of September 5 and the Minsk memorandum of September 19 has been reportedly violated many times. The constant battle in eastern Ukraine has imperiled the peace deal that was intended to end the violent conflict.

After months of clashes in the east of the country, a "day of silence" was declared in the restive region in an attempt to forge a sustainable cease-fire that would lead to a new round of peace talks. The Ukrainian military has accused separatists of violating the one-day truce.

Meanwhile, sporadic fighting continues in the east. Due to the violations, the Ukrainian military has been delaying the withdrawal of heavy weaponry from the front line and the creation of a buffer zone. Pro-Russian separatists reportedly started pulling back artillery on Thursday from positions in the southern part of their Donetsk separatist region in east Ukraine, Reuters reported. However, the move is not considered a withdrawal from the region, nor a significant step to bring peace in the restive east of the country. During heavy fighting, three Ukrainian soldiers were reportedly killed and eight wounded in attacks by pro-Russian separatists in the past 24 hours, a military spokesman said on Thursday.

The pro-Russian rebel groups rejected a law granting self-rule to the rebel-held eastern region that was approved by the Ukraine parliament in September as part of a peace deal under the Minsk Protocol of September 5, and the Minsk Memorandum of September 19, in a bid to end the months-long separatist fighting. Rebels, backed by Moscow, seek full independence, having already declared their autonomy in May through holding an independence referendum, which was not recognized by the Kiev government or the West. Since then, heavy clashes have been reported throughout the region, turning the area into a battle zone.