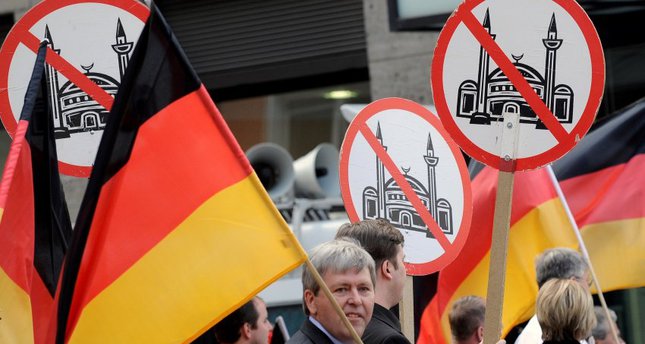 The resurgence of far-right extremism has sparked hatred toward the Muslim community in Germany, deteriorating peace and solidarity within German society

Following anti-Muslim demonstrations over the weekend in Germany, more than 15,000 people took to the streets of the western German city of Cologne on Sunday to protest the growing hatred toward the Muslim population. The recent protests and growing far-right extremism appear to be sowing the seeds of civil unrest in Germany, which has a high immigrant population. With the majority of Germans supporting the anti-Muslim rhetoric and anti-immigration policies, according to a recent poll by Der Spiegel, applied by German Chancellor Angela Merkel and its right-wing bloc's restrictive immigration policies, the rest have rejected any government policy that promotes xenophobia and feelings of hatred toward immigrants residing in Germany.

Opposing "anti-Islamization" marches, thousands gathered at Sunday's anti-racism rally. "We are all standing here to show that this city can display a peaceful side." The mayor of Cologne Juergen Roters told the crowd, DPA news reported.

Before the anti-racism rally took place, Germany witnessed anti-Muslim demonstrations centered on the eastern city of Dresden under the motto PEGIDA, standing for "Patriotic Europeans against the Islamization of the West." Up to 10,000 people gathered in Dresden chanting anti-immigration and anti-Islamic slogans in order to protest the growing number of refugees with different ethnic backgrounds coming to Germany.

The groups have become more prominent in Germany with more people starting to consider Islam as a threat to their society. In the face of the growing number of refugees and asylum seekers seeking shelter in Germany and the threat posed by radical militant group the Islamic State of Iraq and al-Sham (ISIS), the majority of Germans have been fueling anti-immigration sentiment while calling for more restrictive immigration policies. A survey conducted by TNS for Der Spiegel magazine, published on Sunday, suggests that many Germans favor a tough stance on immigration. Right-wing parties have long been critical of immigration policies in Germany while favoring the full integration of Muslims into German society. Chancellor Merkel's coalition partner, the Christian Social Union party, sparked a debate last week after saying that immigrants who want to live in Germany permanently should be obliged to speak German both in public and with their families at home.

Germany is home to 4 million Muslims, in a total population of nearly 81 million. It has the largest Muslim population in Western Europe after France.
Anti-immigration feeling has long been on the rise not only in Germany but in many European countries. European attitudes towards minority groups living within the European Union show that there are considerable negative sentiments toward minorities. The negative attitudes are more common among people on the ideological right, paving the way for growing concerns over right-wing extremism and Islamophobia in the EU. The negative sentiments of many Europeans toward the Muslim population speaks to an apparent flare-up of political and social violence against the Muslim population in the EU.

Far-right principles, anti-immigration, nationalism and Euroscepticism has found significant support from many Europeans over the past few years. The increasing disenchantment among Europeans with government policies towards currency and debt crisis, recession, and savage austerity has led many Europeans to hold far-right discourses including growing hatred and intolerance towards migrant communities. This situation would demonstrate that many migrant communities living within the European Union borders feeling potentially threatened due to the rising negative attitudes among Europeans towards migrants. It is important to note that the growing far-right extremism and anti-Muslim rhetoric would likely lead to the further increase of already existing social tension between Europeans and migrant communities, which has resulted in repeat widespread urban violence and civil unrest.