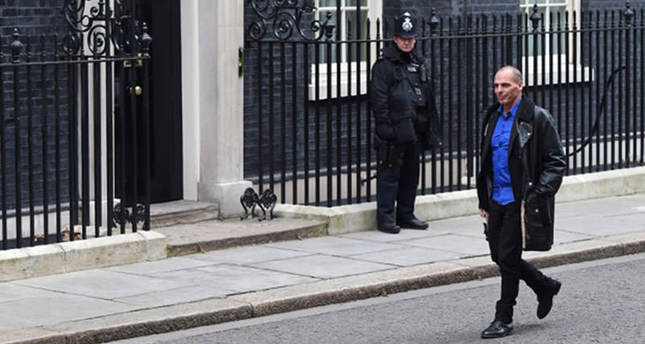 Greek finance minister Yanis Varoufakis might have gone to London to negotiate the country's debts of more than 315 billion euros, but it more looked like he was about to go on stage for a rock concert.

A casually-dressed Varoufakis, wearing an untucked shirt and long leather jacket, contrasted sharply with his suited British counterpart George Osborne, during the two's meeting in London on Monday.

"He [Varoufakis] looks more like a Greek Eurovision contestant than a Greek finance minister," the British Daily The Independent's fashion editor Alexander Fury argued. Varoufakis was wearing a leather jacket, an open-necked shirt of a quiet bright color of blue, and leather boots.

The Greek minister definitely made a statement on Monday with his rebel-like look, but when it came down to business, he was not the rebellious type. Following his meeting with his British counterpart, Varoufakis told the Financial Times that he would not ask for Greek debt to be written off, but rather for a series of debt swaps, which he described as "smart debt engineering."

"The only thing we shall not retreat from is our view that the current unenforceable programme needs to be rethought from scratch," he told the newspaper.

Despite a restructuring in 2012, Greece is still overwhelmed with debts of more than 315 billion euros, upwards of 175 percent of gross domestic product (GDP).

Several countries at the heart of the 19-nation euro-zone - notably Finland, the Baltic States and Germany - are against any reduction in debt, various sources said.

Varoufakis is a professor of economic theory at the University of Athens, and the author of the book The Global Minotaur, which explains the Global Financial Crisis of 2007-2008 utilizing elements from Greek mythology.

Known for being open and accessible, Varoufakis was appointed as Greece's finance minister after the left-wing political party Syriza came to the power following the general elections last week.