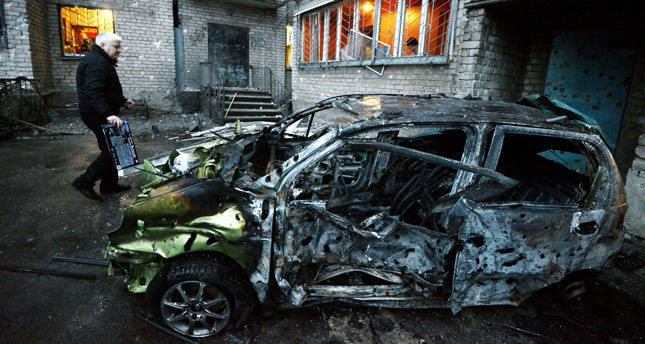 by Daily Sabah with Agencies Feb 03, 2015 12:00 am
Separatists battling government troops in east Ukraine plan a general mobilisation and aim to boost their fighting force to 100,000 men, one of their main leaders said on Monday. Alexander Zakharchenko, leader of the self-proclaimed Donetsk People's Republic (DNR), was quoted by Russian news agencies as saying the mobilisation would take place next week. "A general mobilization is planned in the DNR in 10 days. Ten thousand men will be called up," RIA news agency quoted Zakharchenko as saying in the city of Donetsk, though he did not make clear how the mobilization would be enforced. "The joint army of the DNR and the LNR will be 100,000 men strong," Interfax news agency quoted him as saying, referring to the neighboring self-proclaimed Luhansk People's Republic. "Mobilization is the first stage; there will be volunteers first and we will see what to do next".

Zakharchenko, who was elected in a vote in November that was not recognized by Kiev or the West, did not say how many separatists were currently fighting in east Ukraine.

Touching on the clashes German Chancellor Angela Merkel who supports the Kiev administration, appealed on Monday for a ceasefire to be urgently restored in Ukraine, under the terms of the Minsk peace plan, and added Germany would not support Kiev's military forces through deliveries of weapons. "Germany will not support Ukraine with weapons. I am convinced this conflict cannot be solved by military means," Merkel said during a press conference in Budapest with Hungarian leader Viktor Orban. Merkel will visit the U.S. next week and one of the topics will be Ukraine as the two countries work closely on the crisis. However, Russian Foreign Minister Sergei Lavrov said yesterday U.S. President Barack Obama's rhetoric showed that he favored military solution rather than a peaceful way.

Meanwhile, artillery attacks on the Ukrainian city of Donetsk killed at least one civilian on Monday while Kiev's military reported that five more Ukrainian soldiers had been killed in clashes with separatists in the east in the past 24 hours. Municipal authorities in Donetsk said 15 civilians were killed over the weekend by shells, mortars or other missiles that hit residential areas of the city which is controlled by the separatists. To the northeast of Donetsk, the Russian-backed rebels kept up attacks to dislodge government forces from the small town of Debaltseve, a strategic rail hub, in fighting which has grown more intense since peace talks collapsed on Saturday. Kiev military authorities said separatist forces launched more than a 100 attacks by artillery, rocket systems and tank fire on Ukrainian positions and residential areas in the past 24 hours. "As a result of these attacks and military clashes, Ukraine lost five service personnel and another 29 have been wounded," military spokesman Vyacheslav Seleznyov said at a morning briefing. The crash of artillery fire continued throughout the night coming mainly from the area of the airport which government forces lost to the separatists a week ago. In central Donetsk, about one km (half a mile) from the main square, a shell hit a two-storey house in the morning, killing one civilian. A pool of blood where the civilian was killed could be seen outside the house whose top floor had been largely destroyed, leaving its rooms gaping open.

Kiev, NATO and Western governments say they have evidence that Russia has sent troops and weapons to back the separatists but Moscow denies this. Ukrainian President Petro Poroshenko put the number of Russian troops in the east last month at 9,000. Fighting has increased in eastern Ukraine in the past few weeks and hopes of easing the situation faded after peace talks collapsed on Saturday. Kiev has also mobilized more troops because of the surge in fighting.