Europe swamped with crush of migrants arriving by land, sea 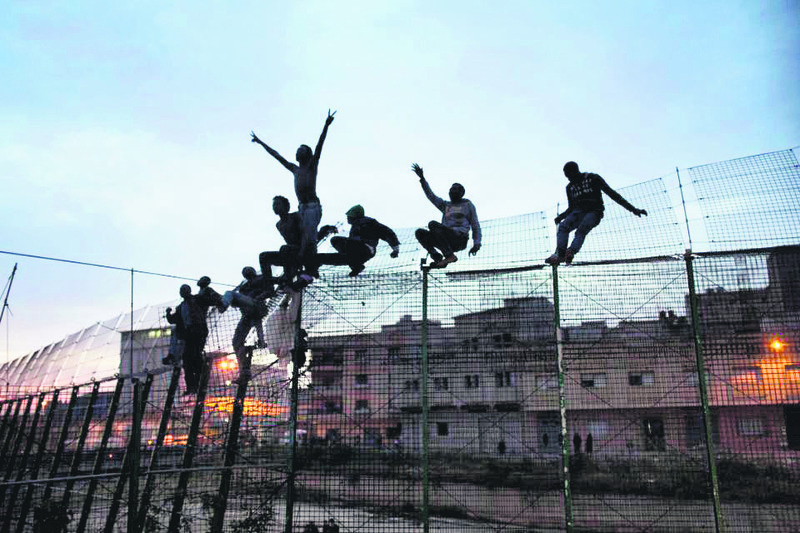 by Associated Press
Mar 07, 2015 12:00 am
The European Union is immersed in a full-fledged migration crisis. Some officials are even floating the idea of a multinational border guard to deal with the hundreds of thousands arriving from war-torn countries like Syria, poor nations in Africa and non-EU neighbors like Kosovo. With no signs the flow will let up anytime soon, the U.N. high commissioner for human rights, Zeid Raad al-Hussein, said Thursday that dealing with migration "cries out for more thoughtful and coordinated action" between EU countries. "The notion of ghost ships drifting on autopilot toward the coasts of Europe in the hopes that coast guards will rescue the people on board and the hideous sight of men and women tearing their flesh on barbed-wire fences in a desperate, and sometimes lethal, attempt to clamber into Europe and find a better, more peaceful life: Such scenes are simply intolerable," Zeid said in Geneva.

TAKING TO THE SEAS

Italy has turned into the prime human smuggling route into Europe because its southern island of Lampedusa lies just 290 kilometers (180 miles) from the coast of lawless Libya, where the absence of a functioning government is feeding a thriving trade in human trafficking. Migrants and asylum seekers pay thousands of dollars each to climb into unseaworthy boats or rubber rafts to try to cross the Mediterranean. Migrants say the armed Libya-based smugglers, who often advertise on social media, are ruthless and some have forced their human cargo to leave even when seas are dangerously rough. An astonishing 170,000 made the journey to Italy last year, most rescued at sea by Italy's coast guard and navy and cargo ships, and the torrent has only increased since January. On Wednesday, a flotilla of ships saved more than 1,000 migrants while 10 others died some of the hundreds or more who die or drown annually on the route.

For years, Italy has been urging the European Union to help stem the flow of migrants with more ships, aircraft or funding, pointing out that most of those rescued intend to reach relatives or jobs in other European countries. This year, an EU patrol mission known as Triton replaced Italy's Mare Nostrum air and sea mission that had saved tens of thousands of lives. But the U.N. and some refugee organizations have called for renewed humanitarian patrols of the Mediterranean, arguing that Triton only monitors European waters and the southernmost borders. "We are facing the worst crisis in a long time in the European Union," Matthias Ruete, the head of the EU's migration office, told EU lawmakers on Wednesday. "I think we have lost at the moment the European citizen, in terms of having faith in the European asylum and migration system."

COMING TO TURKEY, HEADING TO GREECE

Turkey now houses well over 1.5. Million refugees from the war in Syria and has spent more than $5 billion caring for them. But with limited economic opportunities for Arabic-speaking Syrians in Turkey, many are seeking routes into Western Europe and that means via Greece. Tens of thousands cross into Greece from Turkey every year with that number reaching a record of 22,339 people during from July-September last year. Dozens cross by boat to Greek islands almost every day a flow that has increased since Bulgaria and Greece stepped up monitoring their land borders with Turkey.

WHO CAN BLOCK A GHOST SHIP?

Even though it's not a member of the 28-nation EU, Turkey this week appealed for EU help to combat the phenomenon of "ghost ships." Two cargo ships were picked up in the Mediterranean a few months ago, speeding on autopilot toward the Italian coast with more than 1,000 migrants locked up on board. Authorities had to intervene to keep the ships from crashing into the coast. The EU has been seeking an explanation from Turkey as to how the ships could have left the southeast port of Mersin and sailed for Italy without Turkish authorities noticing. Turkey's ambassador in Brussels, Selim Yenel, said the cargo ships were operating outside of Turkey's jurisdiction in international waters, and smugglers had ferried the migrants out to them from points along the Turkish coast. Catching the small feeder boats often "depends on how much intelligence we can gather and then sharing it with our counterparts," Yenel said, adding that "these guys get under the radar, literally."

UP THE BALKAN ROUTE

Coming from as far away as Afghanistan and Syria and as close as economically hard-hit Kosovo, migrants have turned the Hungarian border into a booming illegal transit route. In the last two months alone, thousands a week have been walking through the fields and forests of Serbia to try to slip across the border into Hungary, which is part of the EU's borderless-free zone. Hungary received 42,800 asylum seekers in 2014, compared with 18,900 in 2013 and just 2,157 in 2012. About half were from Kosovo. The flow has slowed to 100-150 migrants daily over the last several weeks due to tighter border controls and increased cooperation between Serbia, Hungary, Austria and Germany.

STORMING THE FENCES OF SPAIN

Each week last year, hundreds of mostly sub-Saharan African men stormed the towering, barbed-wire fences that separate Spain's North African enclave of Melilla from Morocco. The migrants live in rudimentary camps on a nearby mountain before staging well-organized, pre-dawn attacks on the fences. At least 2,100 made it across in 70 attempts in 2014, but many more were intercepted by Spanish and Moroccan police. Many are aiming to eventually reach other European countries, in part because Spain's unemployment rate stands at 24 percent and is much higher for immigrants. Morocco last month cleared out the migrant camps on Mount Gourougou overlooking Melilla, arresting hundreds and shipping many on buses to remote parts of the country. Since then, the number of fence storming has dropped dramatically.
Last Update: Mar 07, 2015 1:19 am