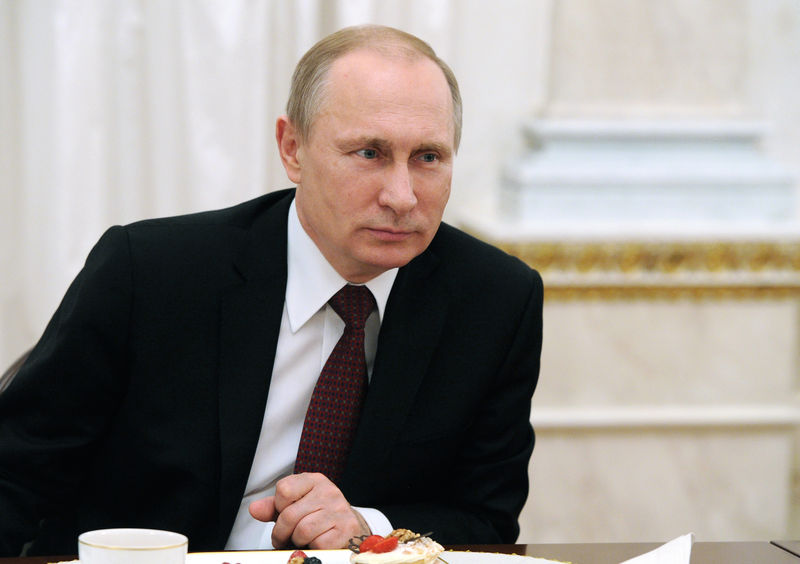 by Mar 09, 2015 12:00 am
Russian President Vladimir Putin said in comments released on Monday that he took the decision to annex Crimea at a nightlong Kremlin meeting after former Ukrainian president Viktor Yanukovych was ousted in February 2014.

"When we parted, I told everybody: We have to start working on bringing Crimea back into Russia," Putin said in the trailer to a documentary film about the subject, produced by Russian state television.

It was the first time that Putin had revealed details about the Kremlin's decision-making on Crimea. He said that the meeting of security officials took place in the night from February 22 to February 23 and lasted until 7am.

Crimea's pro-Ukrainian government was replaced by a pro-Russian one four days later, after troops without insignia - who were later confirmed to be Russian - seized the Black Sea peninsula's government buildings.

Moscow declared the region part of Russia two days after a March 16 referendum, in which it said that almost 97 per cent of Crimeans voted for unification. The annexation was rejected as a gross violation of international law by Ukraine and its Western allies.

In the trailer, Putin also says that during that meeting he arranged an operation to save Yanukovych's life by bringing him to Russia "by land, sea and air."

The former president fled from Ukraine's capital Kiev to the eastern cities of Kharkiv and Donetsk on February 22. He later said that he managed to get to Russia via Crimea.

It was unclear on Monday when the full documentary would be shown. The trailer only said "soon."

NATO on Monday began navy drills in the Black Sea. The US-led training with vessels from Bulgaria, Romania and Turkey includes simulated anti-air and anti-submarine warfare exercises, the alliance said.

The Russian Foreign Ministry has called the drills a provocation. A US commander said Sunday that Russian warships and aircraft were spotted in the exercise area, but acted in line with international rules.

Also on Monday, German Foreign Minister Frank-Walter Steinmeier said that he welcomes the fact that international monitors will soon be able to verify the withdrawal of heavy weapons from the frontline between government forces and pro-Russian separatists in eastern Ukraine.

The Organization for Security and Co-operation in Europe (OSCE), which monitors the ceasefire, has said that to start proper verification it needs more information on the weapons' locations from both sides.

The organization said in a report published over the weekend that its monitors were prevented from verifying the withdrawal on at least four occasions by the Ukrainian military and one occasion by separatists.

Separatists and the Ukrainian military on Monday traded fresh accusations of ceasefire violations.

The Security Council in Kiev said that four soldiers were injured in clashes during the past 24 hours. The separatists in Donetsk said that government troops fired more than 30 times on positions of the "Donetsk People's Republic" within the same period.
Last Update: Mar 10, 2015 2:40 pm
RELATED TOPICS