Two charged over the killing of Kremlin critic Nemtsov 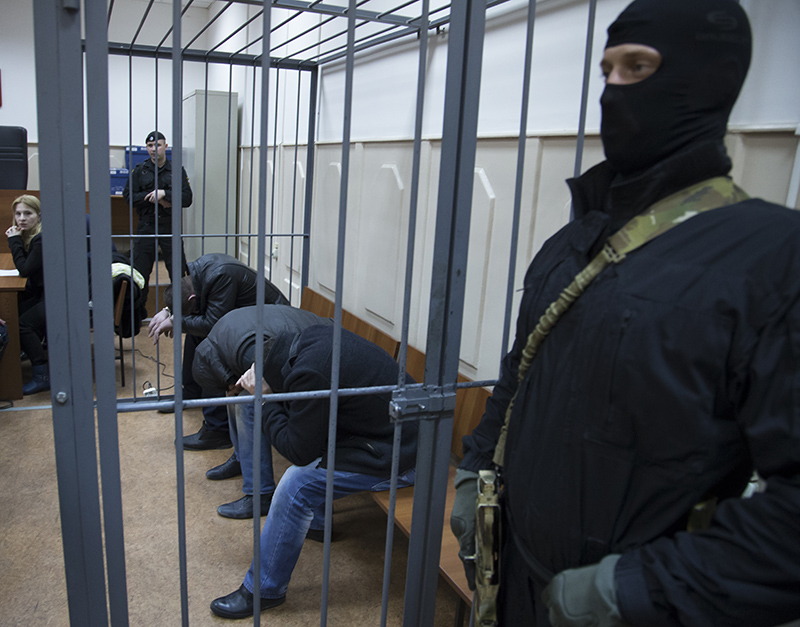 by Mar 09, 2015 12:00 am
Russian authorities said on Sunday they had charged two men over the killing of Kremlin critic Boris Nemtsov and said one of them was a former senior policeman from the mainly Muslim region of Chechnya who had confessed to involvement in the crime.

The two were among five men, all ethnic Chechens, frogmarched into a Moscow courtroom on Sunday, forced by masked security officers gripping their bound arms to walk doubled over, a Reuters reporter at the court said.

The men stood in metal cages as television crews were ushered in to film them.

Nemtsov was shot dead on the night of February 27 within sight of the Kremlin walls, in the most high-profile killing of an opposition figure in the 15 years that President Vladimir Putin has been in power.

Judge Natalia Mushnikova ordered that all five men should remain in custody.

Chechen leader Ramzan Kadyrov, a Putin ally, said the former policeman, Zaur Dadayev, was a pious Muslim who had been angered by cartoons of the Prophet Mohammad in the French satirical newspaper Charlie Hebdo.

Nemtsov, a liberal, had defended the cartoons after terrorist gunmen killed 12 people at the Charlie Hebdo office in Paris in January. Russian investigators said last week they were looking into the possibility that Chechen militants had killed Nemtsov.

"All who know Zaur confirm that he is a deep believer and also that he, like all Muslims, was shocked by the activities of Charlie and comments in support of printing the cartoons," Kadyrov wrote on his Instagram account.

Kadyrov described Dadayev as "a true patriot of Russia" who had received several medals for bravery but had subsequently resigned from his interior ministry regiment for reasons the Chechen leader said were unclear.

There have been cases in the past where employees of Russian law enforcement agencies have been prosecuted after moonlighting for organized crime groups.

"Dadayev's involvement in committing this crime is confirmed by, apart from his own confession, the totality of evidence gathered as part of this criminal case," Mushnikova told Sunday's court hearing.

The other man charged is Anzor Gubashev. The three other suspects are his brother Shagid Gubashev, Ramzan Bakhayev and Tamerlan Eskerkhanov. Previously, investigators said they only had two suspects in custody.

Separately, Russia's Interfax news agency, quoting a Chechen law enforcement source, said a man killed in a standoff with police in the Chechen capital Grozny late on Saturday had also been wanted by police in connection with Nemtsov's killing.

When police arrived at an apartment block, the man threw one grenade at officers and then blew himself up with a second, Interfax said.

Some associates of Nemtsov, a 55-year-old former deputy prime minister who became a Putin critic, say the Kremlin stands to gain from his death. Russian officials deny involvement and Putin has condemned the killing.

The court hearings on Sunday were given extensive coverage on state-controlled media, and presented as proof the authorities were conducting a thorough investigation - not the cover-up some of Nemtsov's friends say they anticipate.

But associates of Nemtsov say they will not be satisfied unless prosecutors track down whoever orchestrated the killing, rather than just the people who pulled the trigger.

There was no word from investigators on who the suspects were alleged to have been working for.

Several other high-profile killings in Russia, including the 2006 shooting of journalist Anna Politkovskaya, have been attributed to gunmen from Chechnya and other parts of the North Caucasus region, while those who ordered the crimes were never firmly identified.

Chechnya has seen violent separatist insurgencies over the past two decades. It is now firmly under the control of Kadyrov, a former rebel who changed sides and pledges loyalty to Putin.