Europe was on the brink of nuclear war, says Russian President Putin 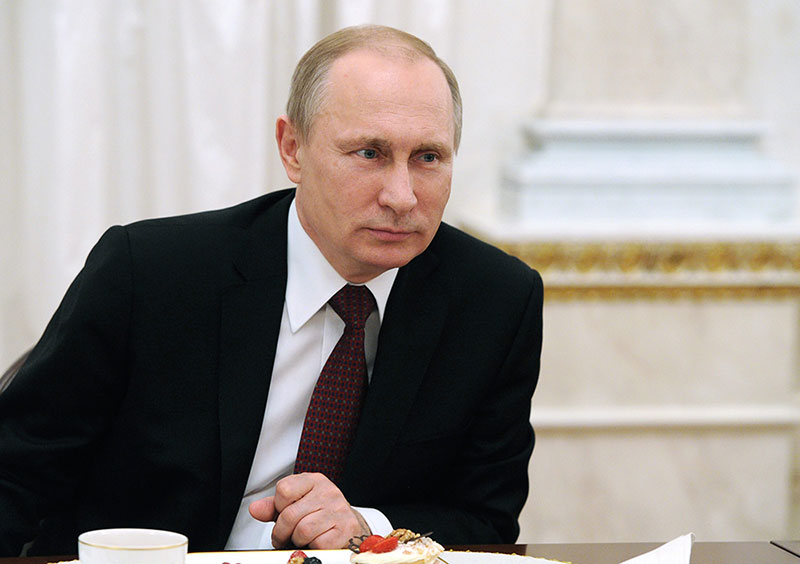 by Compiled from Wire Services Mar 16, 2015 12:00 am
A year after the Russian annexation of Crimea, President Vladimir Putin confessed that he considered putting the country's nuclear forces on alert during last February's Maidan revolution in Kiev, which ended with the fall of the Russian-backed Viktor Yanukovych government.

In a near three-hour documentary called "Homeward Bound," aired on state TV in Russia on Sunday, the Russian president said he was ready to take such a move to protect Russian-speaking citizens in Ukraine and mostly in Crimean peninsula, which he considers a historic part of Russia. Putin's statement reveals that the world may have been on the brink of potential nuclear war on February 28 2014.

In the documentary, the Russian president presents himself as the savior of Crimea. Asked whether Russia was ready to put its nuclear forces on alert, he said "We were ready to do this...It was a frank and open position. And that is why I think no one was in the mood to start a world war."

The Russian president also confirmed that he was "personally involved" in the annexation.

"Do you know what our advantage was?" said Putin. "It was that I personally was involved in this operation."

Putin added that his goal was not to annex Crimea, but to let people choose how they wanted to live, by organizing a referendum.

"In light of what was happening during that time in Ukraine, we couldn't leave the people of Crimea alone," he said.

The Russian annexation of Crimea and the Crimean status referendum signaled Russian military involvement in ex-Soviet countries and a violation of territorial unity. The disputed referendum on the status of Crimea, which was held on March 16, 2014, allowed the secession of Crimea from Ukraine, as more than 96 percent of Crimeans voted for the integration of the region into the Russian Federation.

Following the referendum, Russia approved a draft bill that recognizes Ukraine's autonomous region of Crimea as an independent state. Yet, the U.N. General Assembly Resolution 68/262 on Ukraine's territorial integrity condemned the referendum.

Meanwhile, regarding the shaky truce that generally holds in violence-stricken eastern Ukraine, Ukrainian President Petro Poroshenko slammed the peace deal while accusing pro-Russian rebel groups of not complying with the articles of the cease-fire agreement. "The truth is that the accord is not working," Poroshenko told Germany's Bild newspaper in an interview at the start of a two-day visit to Berlin, as reported by AFP.

The cease-fire agreement negotiated in the four-power talks on February 12 includes the withdrawal of all foreign weapons and troops from Ukrainian territory and the disarmament of Russia-backed rebel groups. Breaches of the Minsk accords have been widely reported, demonstrating that the months-long crisis in Ukraine's east has yet to be resolved despite a series of mediating talks and peace efforts.

The Ukrainian president also urged for more sanctions on Russia over Russia's continuing aggression towards Ukraine. "There has to be a reaction to the violation of the cease-fire. It could be more sanctions, in any case the current sanctions should be extended to the end of the year," he stated while urging the international community to boycott the 2018 World Cup in Russia.

More than 45,000 Russian troops as well as war planes and submarines started military exercises across much of the country on Monday, one day after the aforementioned documentary, in one of the Kremlin's biggest shows of force since its ties with the West plunged to Cold War-lows, Reuters reported.

Defense Minister Sergei Shoigu, who is overseeing an expensive modernization of the armed forces, said Russia faced new threats to its security which obliged it to boost its military strength and capabilities.

"New challenges and threats to military security require the armed forces to further boost their military capabilities. Special attention must be paid to strategic formations in the North," RIA news agency quoted Shoigu as saying.

Shoigu said the order came from Putin, who has promised to spend more than 21 trillion rubles ($340 billion) by the end of the decade to overhaul Russia's fighting forces.

The main focus of the exercises is to test readiness in the Arctic, where Russia has expanded its military presence in recent years, officials said. The exercises are scheduled to continue through to March 21.

Tensions between Russia and Europe worsened last year, leading eight northern European nations to promise to boost cooperation to counter an increase in Moscow's military activity, which has been criticized by Western officials as threatening and provocative.