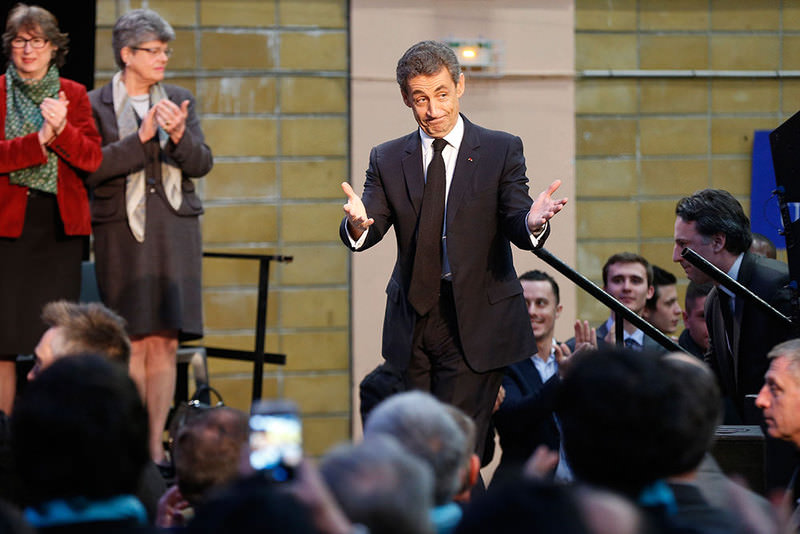 | Photo: AFP
by Daily Sabah Mar 23, 2015 12:00 am
Right-wing parties are continuing to make significant political breakthroughs in French politics as Sunday's French local elections results saw the center-right party Union for a Popular Majority (UMP) and the far right party National Front (FN) of Marine Le Pen take top spots while defeating President Nicolas Sarkozy's socialist party. The second round of the election will be held on March 29. Yet, there will be no alliance between the two parties as the former president Sarkozy suggested.

The right-wing UMP, led by Sarkozy, took first place, gaining 32.5 percent of the vote, while FN came second with 25.4 percent. The former President Sarkozy described the vote as a "massive shift" back to a "reunited" right-wing while Marine Le Pen, the leader of the far-right, called the results a "very big success." The Socialist Party trailed in third with an estimated 22 percent.

The local election marks the far-right party's fourth historic electoral victory of the year after wins in the municipal, European and French Senate elections.

Le Pen's far-right National Front won the European Parliament election, held in May 2014, with 25 percent of the vote while increasing their number of seats to 24 of France's 74 seats in Strasbourg. During the Senate elections held in September 2014, FN secured two seats in France's upper house. The local elections, held on March 23 with a second round of voting on March 30, was a devastating defeat for the French left, and a significant victory for the right-wing parties.

The rise of the ideological right in French politics demonstrates that the increasing disenchantment among French people with government policies toward currency and debt crises, recession and austerity has led many Europeans to adopt far-right views. The unprecedented threat of home-grown militants linked to the Islamic State of Iraq and al-Sham (ISIS) has also led to growing hatred and intolerance toward migrant communities while further fuelling Islamophobia and French nationalism, Euroskepticism.

Another thing is that strong showings from the right parties in the municipal, European, senate and local elections are a sign of growing public discontent with French President Francois Hollande. In France, the number of disenchanted people has been gradually increasing due to Hollande's mediocre presidency that is too often synonymous with immobility and abstention. President Hollande replaced the French Prime Minister with Manuel Valls after the defeat in the municipal elections in late March 2014 in a bid to appease the majority of French people.

However, the victory for the far-right Front National would suggests that Hollande and his socialist government have already lost ground with a significant vote of no confidence among the French people. The latest reshuffle of the French cabinet in early September has shown France to be in a constant state of political turmoil as it battles a stagnant economy, national security and immigration issues. President Hollande is seen as the most unpopular president in French history as opinion polls suggest that his ratings hit below 13 percent while the majority of French people want him to resign.