16 German schoolchildren believed to be on crashed Airbus A320 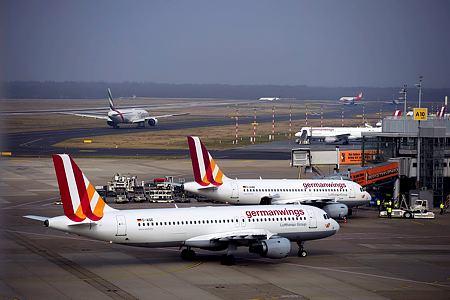 by Daily Sabah with Agencies Mar 24, 2015 12:00 am
There is reason to believe 16 schoolchildren and two teachers from the German town of Haltern am Seewere were among the passengers of the crashed Airbus A320, according to a spokeswoman for the town. The Joseph Koenig High School in the western Germany of Haltern has been closed and a crisis team that includes chaplains established. Flowers were being lain outside the school.


School officials posted online that the students and teachers had spent one week in Barcelona on a school exchange programme.

No citizens of Republic of Turkey have been confirmed among the passengers in the crash. 67 German nationals are thought to be on board, while Spain said 45 people with Spanish sounding names were on the flight.

An Airbus plane operated by Lufthansa's Germanwings low cost airline crashed in southern France on Tuesday en route from Barcelona to Düsseldorf. A total of 144 passengers and six crew members were on the plane, Germanwings CEO Thomas Winkelmann said.

Germanwings held a news conference at 1400 GMT near Cologne-Bonn airport, answering reporters' questions. Germanwings executive Thomas Winkelmann said at the news conference, the flight lost contact with the French air traffic control when it was at 6,000 feet. He said the reason for the crash has not yet been determined yet and they cannot confirm that a distress call was made.

The pilot had "more than 10 years of experience" and some 6,000 flying hours under his belt and the jet had undergone a thorough check in the summer of 2013, Winkelmann told the news conference. He said, "Normal flight operations will continue."

French Interior Minister Bernard Cazeneuve said on Tuesday that the plane's black box has been found. He said, 300 soldiers and 350 firefighters have been deployed to assist local search and rescue at the site of the plane crash in the French Alps. He added that 10 helicopters and a military plane have been deployed, and that the soldiers have special expertise in mountains missions.

The German Embassy in Turkish capital Ankara has lowered their flag to half-staff, saying on their twitter account: "We have all been shaken deeply."