US to increase military presence in ex-Soviet Baltic countries 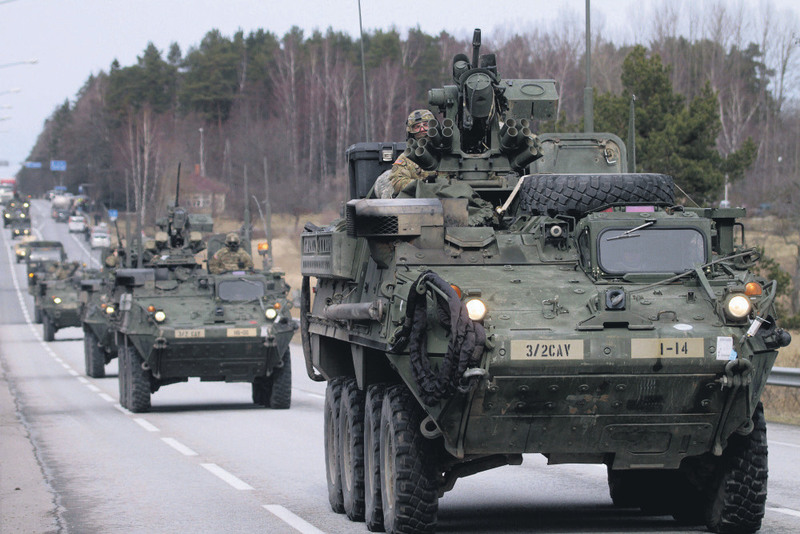 In the face of a possible proxy war with Russia over the Ukrainian crisis, the US is stepping up its military presence in the Baltics with the House of Representatives passing a resolution urging President Obama to send arms to the Ukraine

With Ukrainian separatists continuing their assaults on strategic areas in eastern Ukraine, the U.S. House of Representatives passed a resolution on Tuesday calling on President Barack Obama to send lethal weapons to Ukraine. The U.S.'s recent assertive move on the Ukrainian crisis is also part of a policy on Russian aggression in ex-Soviet countries like Ukraine and those in the Baltics.

The non-binding resolution was approved by an overwhelming majority of 348-48. The Obama administration has been inclined to support lethal weapons transfers to Ukraine, while putting pressure on NATO members to engage more actively in the situation by providing lethal military assistance to Kiev.

In addition to providing lethal weapons to Ukraine, the U.S. continues to step up its military presence in the Baltics against a possible security threat from Russia. A U.S. army infantry convoy is driving through the Baltics and Eastern Europe, seeking to provide reassurance to a region concerned that the conflict between Russian-backed rebels and government forces in Ukraine threatens its security.

The U.S. Dragoon Ride convoy is attracting interest and greetings from people along its route. It started last week from Estonia and passed through Latvia and Lithuania before entering Poland on Monday.

In response to Russia, Britain has also been urging to rebuild defense capabilities abandoned after the Cold War to face growing global threats, including from Russia. A committee of lawmakers said that it would be necessary for Britain to stick to its NATO commitment to spend two percent of gross domestic product on defense, but that this would "not be sufficient." "It is vital to rethink the fundamental assumptions of our defense planning if we are to help arrest the descent into chaos, which threatens to spread from the Western Mediterranean to the Black Sea," the report said.

Britain will deployed up to 75 British military personnel to Ukraine in April to provide advice and training to Ukrainian government forces.

Opposing the U.S.'s pressure to send arms to Kiev, Germany pushed for a diplomatic offensive rather than a military solution to halt the escalating crisis in eastern Ukraine. "One thing is clear I think to all of us: there is no, and there cannot be, a military solution to the crisis in Ukraine," German Foreign Minister Frank-Walter Steinmeier said on Monday.

The U.S.'s European allies have tried to find a political solution to the Ukraine crisis as senior officials from Germany, Ukraine and Russia met in Paris today to discuss an oversight mechanism for a cease-fire in eastern Ukraine.

Clashes continue in the war-torn east of Ukraine with reports of heavy shelling around Luhansk. "On Ukraine, we continue to see an increasing disparity between what Russia and the separatists say and what they do. This disparity threatens the Minsk Agreements and stability in the region. Russia and the separatists claim to be honoring the cease-fire, but in reality they are violating it on a regular basis and are encroaching further beyond the cease-fire line," U.S. State Department spokeswoman Marie Harf said in a daily press briefing on March 23.

"Using cluster munitions shows utter disregard for civilians," said Ole Solvang, a senior emergencies researcher at HRW. "Neither side should use these widely-banned weapons; they affect a large area, endangering nearby civilians, and unexploded sub munitions pose a risk to civilians long after the attack."

As the heavy clashes continue unabated in eastern Ukraine, more than 5,358 people have been reportedly killed and 12,235 injured, according to U.N. figures released in early March. The death toll continues to rise. The shaky February 12 cease-fire agreement is generally holding up in violence-stricken eastern Ukraine. However, breaches of the renewed Minsk Accord have been widely reported, demonstrating that the months-long crisis in Ukraine's east has yet to be resolved despite a series of mediating talks and peace efforts. Also, more than two million Ukrainians have been forcibly displaced due to worsening humanitarian conditions in rebel-held areas where heavy fighting has turned eastern Ukraine into a battle zone.
Last Update: Mar 25, 2015 2:22 pm
RELATED TOPICS